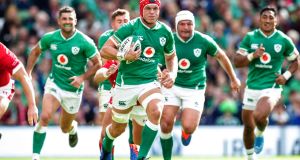 It’s always hard to tell with the pre-World Cup phoney war. Extreme results are commonplace, with even the All Blacks as well as Australia and Ireland suffering heavy beatings. And all the while the coaches are continually shuffling their deck while intent on not showing a full hand.

Ireland tend not to do warm-ups especially well. This dates back to those two defeats by Namibia in 1991, and three months later they came within a whisker of beating eventual winners Australia in the quarter-finals.

They lost to Scotland in Murrayfield and scraped past Italy at Ravenhill in 2007 when warming up for that World Cup.

In 2011 they lost all four warm-up games, and won all four pool games. Winning two and losing two was a precursor to again topping their group four years ago.

Yet, in sandwiching that unnerving defeat in Twickenham with three wins, this preparatory programme has looked decidedly useful.

Unlike England, who have flown out but akin to Wales, the squad depart for Japan on Wednesday, and do so after three days to switch off mentally with their families and friends.

They also do so with the echoes of a fond and winning farewell at the Aviva Stadium and on an upward curve since that 57-15 defeat by England, amid clear signs that the wounds still fester but have also provoked a response.

This was evident in the fired-up performances of the four players retained in the starting XV a week later in Cardiff – Iain Henderson, Peter O’Mahony, Bundee Aki and Jacob Stockdale, as well as those off the bench, notably Rory Best.

There were a couple of particularly encouraging aspects to the performance last Saturday which demonstrated how the Twickenham setback had galvanized the Irish players.

Joe Schmidt and Best have continually highlighted their disappointment at the after-shock to losing line-outs in Twickenham, both in thereafter continually losing them and, in the case of Maro Itoje’s try, conceding a soft seven-pointer.

Errors compounding errors. It’s what Conor O’Shea has cited as Italy’s weakest trait. It’s not what good sides do. And it’s not what Ireland did last Saturday.

In ensuing defensive sets, first Johnny Sexton, Cian Healy and Ryan combined for a turnover choke tackle on Josh Adams, and then Best earned a relieving penalty against Ross Moriarty in the jackal.

Furthermore, they won the next 10 line-outs, and it was particularly encouraging to behold the seamless transition to Sean Cronin’s throwing – the speed and trajectory of which looked very accurate – and Iain Henderson.

Even though their defence initially kept them in the game, Ireland had created more in that first half. Yet given their record when trailing games at half time, winning from that point and finishing as the strong front-running team they’ve become in latter years was also promising.

Interlinked with this was the way Ireland’s fitness levels held up against opponents renowned for their physicality and stamina.

Something about that Twickenham game never sat right even though it revived memories of the meeting in Dublin in February when England so dominated the impact tackles.

Taking that game on the run from an eight-day warm-weather training camp to Carton House, Ireland’s legs just seemed to go from about the 20th or 25th minute. Even against Wales in Cardiff, it was a tad unnerving to see the home players finishing much the stronger in the final quarter.

Yet in light of those reports that the pre-season had been brutally tough from day one, the thought remained that amongst that Irish team behind the team, Jason Cowman is renowned for his work and had been planning this pre-season programme in detail for years. In tandem with Ciaran Ruddock, the rest of the fitness staff as well as the players and coaches, there was always a plan. They’re not idiots.

From the beginning to the end last Saturday, Ireland were strong in the collisions, looked to play at a high tempo and finished like a group of players who would have happily continued playing.

Maybe it’s something to do with all that pilates. The Leinster squad have been regularly attending classes with platinum pilates for some time, and another pilates instructor, Jennifer Hickie, was a regular presence in the Carton House until last Thursday.

Clearly the programme was designed to ensure the players peak in two weeks’ time in Yokohama, and Saturday’s performance provided the most compelling proof yet that they are on course to do so.

True, as Warren Gatland maintained, Ireland returned to traditional virtues and one-off runners, and, as Schmidt conceded, it was more functional than flash.

But as all-comers have discovered in the last World Cup cycle, this potent Irish mix can be hard to contain and, as Eoin Reddan observed on Second Captains, the complaints from Gatland and previously Eddie Jones, are an attempt to goad Ireland into playing a brand of rugby that plays into their defensive hands. Come into the parlour said the spider to the fly.

There will be no avoiding the physical war in this World Cup. Looking through Saturday’s Irish XV, with Stockdale to be factored in, as well as the high impact off the bench, they’re not exactly midgets.

In reviving box kicks from their scrum-half after keeping them under wraps for three games they’re also keeping Gregor Townsend guessing.

Besides which, like all other leading sides, Ireland have surely kept some of their powder dry.