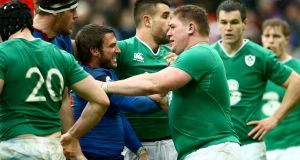 France’s Maxime Médard clashes with Tadhg Furlong at Stade de France in 2016. Away wins are hard to come by in the Six Nations – which rarely follows preordained scripts. Photograph: James Crombie/Inpho

The time to back Ireland has passed. At 6-4 second favourites to win the title, and down to 7-2 to win the Grand Slam, neither odds offer especially tempting value, not in a tournament widely believed to be as competitive as it has ever been, and also considering history, both past and recent. And as we know, those who ignore the lessons of history are apt to repeat them.

Yes, for sure, Ireland are in good health, these things being relative compared to the injury crisis that has afflicted Wales – and by contrast this underlines the value in having players based at home in the Irish central contracting system – as well as England, Italy, France and, if primarily in their front-row, Scotland.

Ireland have truly world-class players in three key positions, namely tight-head, scrumhalf and outhalf in Tadhg Furlong, Conor Murray and Johnny Sexton, as well as a strength in depth with good players across the squad, settled combinations and a raft of players in good form. They also have an excellent head coach at the head of a very good coaching ticket.

The fixtures appear to have fallen favourably too, with a remodelled France under a hastily-assembled new coaching ticket, a remarkably inexperienced squad missing a host of would-be front-liners such as the Clermont contingent of Morgan Parra, Camille Lopez and Wesley Fofana – as the French champions suffer the now annual Bouclier de Brennus hangover.

Playing them first up in Paris looks like a reasonably good time to bump into them as they ought, in theory, to improve as the tournament progresses, except that if there were ever a time for them to benefit from a quick pick-me-up it is in the opening game in front of a potentially disgruntled home public after an abject November.

Ireland have hardened from four-point to six-point favourites for this encounter, whereas two years ago Paddy Powers made it a scratch game and, two years after drawing in Paris, Ireland lost by a point. That followed a draw at home to Wales in the first two games since the second round in 2000 without either John Hayes or Mike Ross wearing the number three jersey; and both tries conceded, by Toby Faletau and Maxime Medard, emanated from a pressurised Irish scrum. Furlong had just replaced White seven minutes before the latter’s try but the tighthead, and by extension Ireland, are in an altogether different place now.

For their part, France are in a mess and are at their lowest ebb in this competition since the 50s, but this is still the biennial itinerary that historically does not favour Ireland, who haven’t won in Paris and London since 1972. (Following that, of course, Scotland and Wales refused to travel to Dublin).

What’s more, that remains the only year Ireland have won in both Paris and London since the first of just two Grand Slams in 1948. In other words, it has happened once in 34 attempts since.

Ireland’s record in Paris is particularly abysmal. They have won there just once since some young lad in a baggy jersey by the name of O’Driscoll scored a hat-trick in a 27-25 win, which still needed a huge late penalty by David Humphreys.

That sole win since was also by just two points, 22-20, in the title-clinching victory on the last day four years ago. In other words, Ireland’s record in the championship in Paris since the 11-8 win at Stade Colombes in 1952 is played 22, won two, drew one and lost 19.

Ireland’s record in Twickenham is not a whole lot better. They have lost there four times on the trot, including the World Cup warm-up match of 2015. In Ireland’s last 11 visits in this tournament to Twickenham, their record reads played 11, won three, lost eight.

Whisper it quietly too, but even in the last four years, Ireland have not been particularly good away from home. Whereas they remain unbeaten in their last four campaigns at the Aviva Stadium, winning nine and drawing one of ten games, but over the same period they have won four and lost six games away.

Two of those wins were in Rome, along with the aforementioned title clincher in Paris and the 40-10 win in Murrayfield which helped to retain the title on points difference in 2015. Otherwise, there have been two defeats in both Twickenham and Cardiff, along with one each in Paris and Murrayfield.

So it was that last season, Ireland were widely tipped to win the title, or at any rate have the title on the line when hosting England on the final Saturday, but in the event neither came to pass.

For sure, Ireland look well equipped to win in the Stade de France next Saturday. They are then at home for three consecutive games, over five weeks and three days, with no travel, and optimum time, be it seven or 14 days, between games. Like next Saturday, as things stand, Ireland will be favourites in all three games, albeit Wales and Scotland will be dangerous, and particularly the winners of their opener against each other on Saturday.

Even then however, England are also favourites in all of their first four games, as is the case for their final game against Ireland at Twickenham on St Patrick’s Day. So they will assuredly remain come March 17th.

Hence, the back-to-back champions are entitled to be favourites, despite what their coach may say.