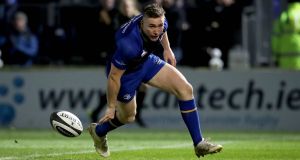 It’s hard not to get truly excited when a rare talent comes along. As was the case with Brian O’Driscoll and Luke Fitzgerald, so it is with Jordan Larmour. That’s pretty exceptional company to be placing Larmour alongside, but as with those two, a young player such as the 20-year-old St Andrew's product does not come along very often.

The three rounds of interprovincial derbies were largely absorbing, entertaining affairs, pockmarked with high skill and plenty of individual X factor, be it James Lowe, Matt Healy, Christian Leali’ifano, Andrew Conway or whomever, but no one did more to light up the last three weeks than Larmour.

Blessed with real pace and eye for both space and the try-line, as well as a capacity to seize the moment, particularly in broken play, Larmour has a fiendishly late step which can leave would-be tacklers groping thin air without so much as a finger being laid on him.

As he showed with that virtuoso 60-metre try which stymied Munster’s fightback at Thomond Park on St Stephen’s Day, Larmour can also step both ways. So it was that first Sam Arnold and Rory Scannell, and then Ian Keatley, were all left for dead.

It even eclipsed his stunning try in the win away to Ulster at the end of October when an early replacement for Noel Reid in midfield. There he left Iain Henderson and Aaron Cairns groping for air, as was the case with Jacob Stockdale last Saturday. And these aren’t mugs that Larmour is leaving in his slipstream. They are proper professional rugby players.

In just a dozen appearances in his rookie season (and five of those off the bench) Larmour has already created a portfolio of six tries. He appears to have developed a particular liking for interpros, scoring four tries in three of them. He also comes across as grounded and level-headed.

It helps him that, unlike O’Driscoll and to a lesser extent Fitzgerald, Larmour has role models such as Garry Ringrose and Joey Carbery, two marginally more recent game-breaking match-winners to be churned out by the remarkable Leinster conveyor belt. As those examples also highlight, Leo Cullen and Stuart Lancaster have a proven willingness to give young players their chance.

Every squad – but perhaps more so the Irish provinces given their dependency on home-grown, indigenous players – needs the energising effect of new players breaking into the senior team, ideally every season, as well as quality new signings from abroad. Think back to Munster’s Heineken Cup success in 2006, and how the emergence of Tomás O’Leary, Barry Murphy and Iain Dowling contributed so richly to their 2008 triumph.

Senior players respond to their arrival. It may merely be a coincidence, but the rejuvenated duo of Rob Kearney and Fergus McFadden are playing as well as ever. Hence, Larmour’s immediate task is to break into the Leinster team for the big games, and in addition to those two, there is Dave Kearney, Barry Daly, James Lowe, Adam Byrne, Isa Nacewa and Joey Carbery. Pick three from those nine? Ye Gods!

It’s worth noting, of course, that Larmour was picked in Leinster’s matchday squads for both games against Exeter on the bench, before being chosen as the starting fullback against Munster and Ulster. Lancaster has a proven track record in developing young players and rates Larmour very, very highly.

If Larmour was to at least make the 23 again for the upcoming games against Glasgow and Montpellier, there would be a compelling case for including him in the Six Nations squad. Bearing in mind the 2019 World Cup is now less than two years away, ideally Joe Schmidt and the Irish think tank would want prospective members of that squad to have a reasonable number of caps under their belt.

As he did with Tadhg Furlong, Schmidt has already begun that process, fast-tracking Andrew Porter, James Ryan and Jacob Stockdale into the Irish squad for last summer’s tour to the USA and Japan, as well last November’s Guinness Series. Porter, like Stockdale, was 21 and had started just one game for Leinster when making his Test debut while Ryan, then 20, made his Irish debut before doing so for his province.

All this talent, yet such increasingly shrinking time to accumulate Test match experience. Between now and the next sortie to Japan, there will be two Six Nations campaigns, a three-Test tour to Australia along with three, maybe four, Tests next November against New Zealand, Argentina and a tier two country. Then it’s the World Cup warm-up games circa August/September 2019.

Given the Six Nations is a prized tournament to win in its own right and not the place for experimentation, one suspects Larmour will have to bide his time. A little surprisingly, he was not invited along to the two-day, pre-Christmas Irish training camp, whereas the aforementioned McFadden and Daly were.

That Munster game also exposed some defensive flaws, yet Larmour is riding the crest of a wave at the moment and so banging on Ireland’s door. Thus, the benefits of at least exposing him to camp life and training at the Irish squad’s base in the Carton House during the Six Nations would appear plentiful, even if he were then released to play in Leinster’s Pro14 games during that window against Edinburgh, the Scarlets (twice) and the Kings. All this would be with a view to blooding him on the Australian tour.

Of course, there are many cautionary tales of young talent being thrown to the international wolves prematurely. Matthew Tait springs obviously to mind, and maybe even Fitzgerald himself to a degree. Like him, Larmour is a diamond to be carefully handled and polished. So however the next stage of Larmour’s exciting career pans out, as with Robbie Henshaw and Ringrose, it will be mapped out carefully and with his best development in mind.

Still, it’s hard not to be excited.