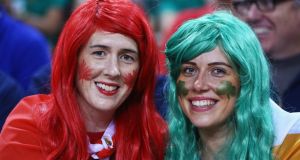 A Canada and Ireland fan enjoy the atmosphere during the 2015 Rugby World Cup Pool D match between Ireland and Canada at the Millennium Stadium on in Cardiff on Saturday. Photograph: Michael Steele/Getty Images

The stadium roof stayed on throughout the game, but on a glorious Autumn day in Cardiff, not even a roof could darken the mood of Irish rugby supporters.

They basked in sunshine before and after the 50-7 victory over Canada. And nothing that happened in between suggested that the outlook was anything other than bright.

The Canadian supporters enjoyed themselves too, especially when their star man Daniel Van Der Merwe ran half the length of the field to score their only try, late in the second half.

But their maple leaves seemed to wither slightly under the 80-minute onslaught of Paul O’Connell and his men. October could be hard on them.

Nobody expected Ireland to lose this match, or win it less than convincingly. Still, we have tended to be slow starters in World Cups. And if Canada is known for anything, it’s a reputation for being able to cut the high and mighty down to size.

Sure enough, the country’s most visible supporters in Cardiff before the match were a large group of lumberjacks, with beaver hats, red-and-black check shirts, and inflatable chainsaws.

On closer inspection, they all turned out to be English, from Reading. “It was either this or leprechaun outfits,” explained a spokesman. And as it turned out, the blow-up chainsaws were an accurate prediction of their adopted team’s cutting edge.

The splendidly dressed Mounties, by contrast, were real: at least in the sense that they were from Canada. They were a thirty-strong delegation from the Calgary Canucks rugby team, to be exact. But their uniforms were strictly fantasy, as was their optimism.

“For sure!” one said, when asked if they had a chance, while a fellow Mountie went so far as to predict a tense, low-scoring affair, with his team edging it “Seven-Five”. He was right about the seven, anyway.

In fact, seven was a lucky number for Ireland on Saturday. They scored seven tries. Their Number 7 (Sean O’Brien) started the tout. And there was at least one man in Cardiff who was convinced that this was the first of seven games Ireland would be playing in the tournament.

His name was Philip Preston, youth development officer with Tallaght Rugby Club. That, by the way, explained another numerical equation, written across his tricolour, and contradicting a well-known stereotype about the sport, as played in Leinster.

“Rugby is not D4,” the flag declared. “It’s D24”. As for this tournament, even before kick-off, Philip’s optimism was unbounded.

“We’re going all the way to the final,” he said. And after a game in which the mounties didn’t get their man, on seven separate occasions, it was tempting to think he might be right.

1 Ken Early: PSG would be sensible final move for Ronaldo
2 Rory McIlroy: Maybe I’m just not as good as I used to be
3 The Offload: Joe Schmidt the influencer is due a second act
4 My sporting disappointment: Jimmy White and the elusive World Championship
5 GAA permits clubs in Kildare, Laois and Offaly to reopen
Real news has value SUBSCRIBE