Secondrow could miss the rest of the tournament with knee injury 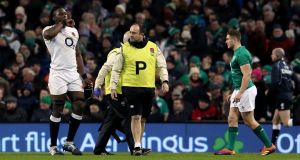 England’s Maro Itoje leaves the pitch with an injury during the Six Nations match against Ireland at the Aviva stadium. Photograph: Brian Lawless/PA Wire

Maro Itoje is set to miss England’s Six Nations matches against France and Wales and may be out for the rest of the tournament, because of knee ligament damage.

In better news for head coach Eddie Jones, Manu Tuilagi is clear to face France on Sunday after escaping a citing for a shoulder charge on Ireland’s Jacob Stockdale. Itoje’s absence, though, will be keenly felt.

England will confirm on Tuesday the length of Itoje’s injury but the best prognosis is thought to be a return for their last match of the championship, against Scotland on March 16th. England players have been known to make comebacks far quicker than expected but Itoje, who was on crutches during the celebrations after the win against Ireland on Saturday, may also have played his last Test before the World Cup in September.

Jones is well stocked at secondrow and Courtney Lawes made a considerable impact against Ireland off the bench, while Joe Launchbury is expected to come into the matchday squad in Itoje’s absence. It is nonetheless a blow for Jones to lose a player he believes “is going to become the best lock in the world”.

Itoje also sustained a knee injury towards the end of last year and spent five weeks out as a result. The initial injury was sustained at England’s October training camp in Portugal but he went on to play in all four of their autumn internationals and once for Saracens before the true extent of the problem became clear.

Tuilagi is free to play consecutive England matches for the first time in five years after the citing officer, Jeff Mark, chose not to bring disciplinary proceedings against the centre, thereby ending any possibility of a suspension. – Guardian