Wales and North take advantage as France lose all direction 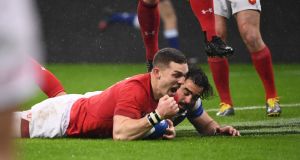 Madness – but is not always between these two? Or, at the very least, when France play. Still, we have no idea who or where they are. Les Bleus tore Wales apart in the first half as much as any side can be torn apart in rain like this. The visitors did not know where to turn, their quiet confidence before this tournament shredded, their composure shot.

France turned round 16-0 ahead but it could have been more, Morgan Parra missing three kicks at goal. Then they gifted Wales the game in the most agonising manner, yielding three tries in the second half, each one softer than the previous, the third just after they had regained the lead.

England will have their eye on France at the moment, and not just because they play them in round two. The two will face each other in the pool stages of the World Cup. Early reports on the latest manifestation of that most unknowable entity, the France XV, are ominous. Anything could happen in Japan.

Here Wales were braced for a battering by one of the heaviest packs known to rugby, nearly 50kg heavier than the Welsh. When the rain set in an hour or so before kick-off that expectation turned into an assumption. Sure enough, France confounded us all.

French power up front was the least of Wales’ problems. Les Bleus had also picked a backline of more traditional elan and they were not afraid to use it. Threats came at Wales from every player, one to 15, and never once from anything so slow or predictable as rumble up front.

Louis Picamoles cut back after one fluent move to score the game’s first try after only five minutes; at the start of the second quarter France had their second. Penaud cut Wales up down the right, the French midfield conveyed the ball sweetly left, where Arthur Iturria, yet another threat, this one unexpected on the flank, released Yoann Huget for the corner and a 10-0 lead.

This time two years ago, in the infamous 100-minute match, Wales had been kept in the match by the boot of Leigh Halfpenny. He was absent here, which was a mixed blessing. No reliable marksman, but at least Liam Williams could showcase his talents. As ever, he proved Wales’ most threatening player. After one slashing run, he was denied only by Picamoles’s tackle, then another run won Wales a penalty.

Gareth Anscombe was given the tee in Halfpenny’s absence and missed that shot at goal and another in the first half, a failing that seemed to spread to the rest of his game. He and his halfback partner, Tomos Williams on his Six Nations debut, endured a torrid time. Wales could build nothing on the back of it, making nine handling errors in the first half alone.

On the approach to the break Williams carried over and France won a penalty from the subsequent play, which Camille Lopez converted. On the stroke of half-time Lopez extended France’s lead to 16-0 with an audacious drop goal.

But this is France. No one is ever quite safe against them but neither are they ever quite beaten by them. Sure enough, nothing looked on as Wales swung the ball aimlessly back and forth five minutes into the second half, but Josh Adams suddenly waltzed clean through their fringe defence to find Williams on hand for the try.

It was redemption for the young scrumhalf just before he and Lopez were replaced. In between, though, Wales struck again and this time the gift from France was toe-curling.

A nothing kick to the try line from Hadleigh Parkes was fumbled by Huget and George North scooped up the ball to touch it down. Wales, barely 10 minutes into the second half, were within two points.

They thought they were ahead just a few minutes later. Ross Moriarty went over but he was called back for crossing. A penalty that might have calmed French nerves was pushed wide by Lopez. France’s composure was shot. And then their lead was. Dan Biggar, on for Anscombe, does not tend to miss. A penalty from him had Wales ahead on the hour.

It had come from a scrum, the very area we had expected France to dominate. Expectation – indeed, reason itself – had left the building. So at the next scrum, penalty, of course, to France and Lopez, with 10 minutes to go put France back in the lead.

Then the maddest moment of them all. Sebastian Vahaamahina, one of France’s biggest, decided to fling a 30-metre pass as if he were France’s deftest. North, again, pounced on it to gallop home. Wales got away with this one. France will be, well, mad. – Guardian