Gerry Thornley: Ireland forwards a match for any pack in the world 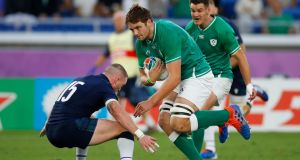 Iain Henderson was back to his formidable best during the victory over Scotland in Yokohama. Photograph: Odd Andersen/AFP/Getty

Welcome back Ireland. Not that they ever really went away and the performances against Wales were pointers. But their opening game of the 2019 World Cup against Scotland evoked memories of their annus mirabilis.

As their maul went to work you could have thrown a blanket over the pack, Conor Murray was box-kicking again and, amid further distinct shades of that win over the All Blacks last November, Jacob Stockdale was freed down the left hand blindside for one of those chip and chase party pieces he has perfected.

This was 2018 revisited, or at any rate an Irish team rebooted.

The pack, effectively first-choice, were back to their cohesive best, securing possession on all 22 of their set-piece platforms, with every one of the forwards contributing to the lineout maul which culminated in Rory Best’s try.

Coming after the Twickenham horror show when taking that friendly on the run, that was a statement try for pack and skipper alike, in what must also have been a very satisfying and rewarding first outing for Simon Easterby, Greg Feek and the forwards.

As they showed in 2018, these Irish forwards are a match for any other pack in the world. At its hub was the Iain Henderson-James Ryan combination. Both are young, mobile, dynamic, modern-day locks and ever since Ryan burst onto the Test scene, one always felt this could be one of the truly great Irish secondrow partnerships.

Save for Henderson instead of Devin Toner, it was also the exact same pack which started against the All Blacks last November, when Henderson replaced Toner for the final quarter.

It was time for Henderson to rediscover his 2017 midweek Lions form and reach the same levels as the phenomenal Ryan – who is showing more and more signs of his leadership abilities on and off the pitch – and the Ulsterman duly delivered.

As well as calling the lineouts, Henderson also offers a more all-round, all-court game than Toner.

Nor did the pack miss a beat when Jack Conan temporarily replaced Josh van der Flier and then Peter O’Mahony. Likewise when David Kilcoyne and Andrew Porter were introduced as early as the 50th minute. As hoped beforehand, considering Porter’s maturity compared to Furlong four years ago, Ireland have more depth and a stronger scrum, as well as impact, than the last World Cup.

The old adage that packs win matches, and backs by how much, was given a twist, as the Irish pack not only won the match but pretty much decreed by how much as well.

They didn’t just provide the platform for this win, they were the chief executioners too. The lineout maul was the source of two of the three first-half tries – converting one of them directly – with the scrum the launching pad for the third.

Within sniffing distance of the line, and Murray in supreme command of all around him, all three were largely the work of the forwards. All of them, and at the end especially O’Mahony, paved the route to the line for Best, and the burrowing finishes by Ryan and Furlong were supplemented by Cian Healy and Best latching on to provide some low-to-the-ground leg drive.

The Scottish media will lament another apparent no-show, and their route to a potential quarter-final with the All Blacks now looks anything but serene, but Ireland must be a curse to play against in this mood. They have an uncanny ability to make opponents look as if they’re playing badly.

Converting tries on their first three sorties into the Scottish 22, by rights Ireland should have put Scotland to the sword, for the biggest failing in the performance was that Ireland came away empty-handed from the next two visits.

But maybe that’s no bad thing, on two fronts. While keeping the squad’s feet firmly on the ground, it will give Joe Schmidt and co ample video ammunition to work on. They didn’t fully show their hand either. One suspects there’s more in this Irish attack as well.

The sight of Murray at his imperious best was so reassuring. It was a reminder that you wouldn’t swap him for any other scrumhalf in the world.

Against that, maybe it’s time to fret a little over Johnny again. The unspecified “tightness” has morphed into a bang on the thigh, and he twice received treatment high up on his kicking leg. Basically, we’re not being told, and maybe we just fret too much. It could be the one glitch in the machine, but if Sexton reproduces his form of 2017 and 2018, Ireland will have all cylinders pumping.

With a six-day turnaround before Japan, and both Jack Carty and Joey Carbery (who did the full warm-up last Sunday) fit, if rested on Saturday, then with just two games under his belt this season, Sexton will presumably play against Russia to keep him ticking over. Playing him against Samoa a week before the quarter-final would be risky.

The decision to bring Chris Farrell ahead of Will Addison was clearly a close call, but it already looks thoroughly vindicated. Schmidt’s preference for Jordan Larmour at fullback, with Andrew Conway on the wing, had also been questioned but, yet again, this too was borne out by their significant contributions to a win which makes for completely different mood music henceforth.

If Ireland overcome Japan and then Russia and Samoa, along the way Schmidt and his think tank can plot for a quarter-final against the Springboks, and with a seven-day turnaround.

Rassie Erasmus and Jacques Nienaber undoubtedly have inside knowledge, and the addition of Felix Jones seems almost with a view to spooking Schmidt.

However, ala the Chicago win over the All Blacks, given plenty of advance warning last Sunday was further evidence of how Schmidt and co can plot any opposition’s downfall, especially when the pack is at optimum level.

They can start plotting over the next three weeks now. Mervyn Murphy and Vinny Hammond are going to have even less sleep than normal in their video bunkers.

1 GAA club matches to return on July 31st with intercounty games in October
2 Betting shops face uncertain future as they prepare for Monday reopening
3 Liverpool could seal title win at Anfield when they host Crystal Palace
4 Connell losing touch with club championship is real tragedy of Normal People
5 Lifting the lockdown: what does it mean for sport?
Real news has value SUBSCRIBE