‘There’s no doubt that it’s a huge game for lots of different reasons, but for us it’s the next game' 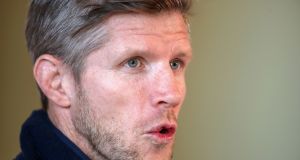 As is often the way in weeks such as this, and seemingly all the more so with England under Eddie Jones, the build-up to Ireland’s opening Six Nations joust with England at the Aviva Stadium on Saturday has been somewhat over-shadowed by one comment.

Previously there have been barbed references by Jones to Johnny Sexton’s wellbeing, which was particularly tasteless, and Ireland’s “kick and clap” rugby.

Conceivably Jones may, or may not, have got under Joe Schmidt’s skin slightly before England’s 21-10 win at Twickenham three seasons ago. Then Jones claimed that Ireland kicked 60-70 per cent of their possession, which was not only incorrect but ignored the fact that England actually kicked more.

Whether it had any material effect on the way Ireland played, or on the outcome, is debatable, but on the back of successive wins over England since then at the recent Six Nations launch Schmidt just seemed amused by Jones’s latest verbal jousts, such as Sexton “having a bat phone to the referee”.

“I want to get hold of it if I can,” responded Schmidt. “I’d like a direct dial myself. I don’t know that Commissioner Gordon is in the building when matches are being played,” he added in reference to Batman’s ally, and also pointed out that Owen Farrell, Dan Biggar and other uber-competitive outhalves wouldn’t be different from Sexton.

The latest perceived barb from England’s defence coach John Mitchell that Ireland “will try to bore the shit out of us basically” has to be taken in the context of the former All Blacks coach also describing Ireland as probably the best side in the world and very well coached.

As Irish assistant coach Simon Easterby said in response on Tuesday: “It’s a headline, it’s not the meat of the article or the conversation. There was a lot of stuff in there that John was saying that was positive, and it’s just the fact it came across in such a way that maybe he wanted it to affect us.”

The verbal grenades assuredly generate far greater noise outside Ireland’s Carton House base than inside.

“If you believed or took too much time on the things that get said outside in the media or from other coaches then you’d spend all your times trying to put fires out. So we don’t focus too much on it. It is what it is, an opinion, and it’s a bit of a headline.”

Ireland, no less than England or any other side in the Six Nations, are seeking points for winning as opposed to style.

“I think we know we’ve got to play a certain way,” said Easterby, perhaps acknowledging that Ireland’s possession-based game is what has earned them 18 wins in their last 19 Tests.

“I think the game will be physical, and we know we’ve got to set a foundation, a platform. Similarly, I’m sure they’ll be saying the same thing. But I think some of these games will come down to fine margins.

“Little things will happen in a game which will contribute to the right result or a loss. Certainly the more positive moments we can build up in a game the more chance of us winning it.”

“It’s not so much about how we win, it’s more about us getting a performance we feel is good enough to get a result against a very good England team.”

Furthermore, no Ireland-England game needs to be spiced up by pre-match jibes. The last time Ireland played England on the opening Saturday in 2000 at Twickenham, Easterby hadn’t even played his first game for Ireland, much less coached them.

Admittedly, as a result of that 50-19 loss in Twickenham, Easterby was one of five debutants in the 44-22 win over Scotland a fortnight later, which in many ways kickstarted the extraordinary rejuvenation in Irish rugby.

“I think it brings more out of the anticipation of playing against England; the fans, the media, people start talking about this game probably after we’ve played the USA. So, there’s no doubt that it’s a huge game for lots of different reasons, but for us it’s the next game, and that makes it the most important game,” said Easterby.

As regards Easterby’s own area of expertise, the lineout, Argentina went after Ireland’s throw last November by picking a third lock at blindside flanker and nicking three throws, prompting speculation that England might do likewise.

“Certainly that was probably an area where we didn’t meet our standards in that game at lineout time in November,” said Easterby. “There were a number of factors in that. One of them would be that they defended particularly well, and they did select three lineout forwards in their locks and at ‘6’. But we can also do things better than we did that day, and I think there are a number of factors we’ve looked at post that game.”

Although Devin Toner’s stock only appeared to rise when he was both on the pitch and off it last November, Easterby said there was more to Ireland’s difficulties than that.

“Dev is massively important to the setpiece,” said Easterby, adding: “I think probably James [Ryan] has contributed to that, pushed him on a bit and certainly making him play to a level that maybe Dev wasn’t playing to a couple of years ago.”

“I certainly wouldn’t put some of the issues that maybe we didn’t quite get right to not having Devin there. We got a few things wrong ourselves, and came up against a couple of teams that were pretty competitive in that area as well.”