Duo named in Australia side to face Lions in Melbourne 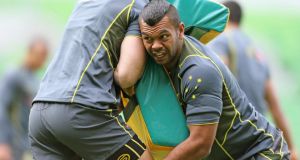 Kurtley Beale during Australia training at AAMI Park in Melbourne on Thursday. He will play fullback against the Lions in the second Test. Photograph: Scott Barbour/Getty Images

Australia coach Robbie Deans has warned Kurtley Beale and James O’Connor for staying out until the early hours of the morning, but never considered dropping them against the British and Irish Lions.

The Melbourne Rebels pair were photographed at 3.50am at a fast food restaurant, where they posed for pictures with supporters, but the Australian Rugby Union established during an investigation that they had not been drinking.

Beale has been selected at fullback for Saturday’s second Test at the Etihad Stadium in Melbourne, while O’Connor continues at outhalf despite failing to impress amid difficult circumstances in last weekend’s 23-21 defeat to the Lions.

While deciding not to discipline the duo, Deans was unimpressed by the poor judgment that has brought unwanted attention on the Wallabies camp.

“Obviously that’s not an ideal hour. We’ve had a conversation for sure. Suffice to say it wasn’t a comfortable conversation,” Deans said.

“It’s not best practice in sleeping habits. I understand they were keen to catch up with their club mates, but they understand that it was too late for them to get to bed.”

When asked if he had considered standing them down against the Lions, Deans said: “No, they haven’t broken any team protocols, but obviously it’s not best practice. It’s not ideal and I won’t be alone in thinking that way.”

The gravest concern is over Beale, who has only recently returned to the Wallabies fold after undergoing treatment for alcohol-related problems that saw him brawl with Rebels team-mates earlier this year.

It was feared he would miss the Lions series due to his time in rehabilitation, but he was selected on the bench for the first Test in Brisbane.

The troubled 24-year-old came on as a 39th-minute replacement for the concussed Berrick Barnes and made several trademark breaks that helped haul Australia back into contention.

A scripted comeback awaited when he stepped up to take a match-winning long-range penalty in the final act of the game, but he slipped during the run-up and the Wallabies were beaten.

Deans is satisfied he has the resilience to deal with the setback at the Suncorp Stadium, partly due to the difficulties he has experienced in his private life.

“Kurtley’s a lot stronger now than a couple of years back. He’s shown that in the way he’s gone about his work this week,” he said.

“It’s a tough circumstance for any young player to experience and it has the potential to affect his self-belief.

“What Kurtley has been through in recent times has made him a much stronger character, which is what tends to happen the more experiences you have in life.

“If you retain the meaning and learning from them, you’re more able to deal with those circumstances.

“I’ve got no doubt that Kurtley dealt with the disappointment a lot more effectively than he may have done previously.

“He has a big future, but like every other player in the game there are potential derailers out there.

“They’ll never go, they’re lifelong challenges, but from what we’ve witnessed and seen he’s taken a step in recent times.”

Australia, whose backline was decimated by injury in the first Test, must win on Saturday if they are to take the series to a decider in Sydney on July 6th.

“For our team to put themselves in a position to win that game after everything that had gone on was remarkable,” Deans said.

“We were close last week but fell short. We have to win on Saturday and will go toe to toe again.

“Everyone will be a lot better for having played that first Test. It was fast and furious last week and will be the same again on Saturday. It’s going to be a ripper.”