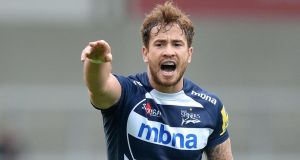 England have named their 34-man training squad for the Six Nations game against Wales on 6 February, with Nick Easter and Danny Cipriani recalled from the international wilderness.

Cipriani has not featured in a championship game for seven years, while Easter, 36, is involved for the first time since the 2011 Rugby World Cup, returning due to the broken leg sustained by Gloucester’s Ben Morgan.

While England are struggling with injuries to players including Ben Foden, Manu Tuilagi and Courtney Lawes, Leicester’s Dan Cole is named in the squad despite his fitness concerns.

Meanwhile, Sam Burgess could be part of England’s Six Nations plans if he impresses for the Saxons against the Ireland Wolfhounds in Cork on 30 January.

Stuart Lancaster said: “Looking at both squads it’s obvious there is a lot of depth and competition in every position, which is what we want. Many players are putting their hand up in the Aviva Premiership and Europe and they have a chance to impress in training as we build towards the games against Wales and the Wolfhounds.

“It’s great to welcome back some of those players unavailable for the QBE Internationals in the autumn. They offer us a lot of quality and experience. So too Nick Easter, who has played well for Harlequins and, with the injury to Ben Morgan, both he and Tom Waldrom in the Saxons will provide us with specialist No 8 options alongside Billy Vunipola. That’s something we feel we need going into the tournament.

“We have plenty of players to consider and with some players still being assessed from last weekend after suffering knocks we have kept our options open. It’s a big European weekend ahead and there may be further changes once we assess the fitness of the players after round six and we will provide an update on Monday.

“We will use the four-day training camp and the Saxons game to narrow down selection as we lead into the opening game against Wales.

“The match against the Wolfhounds in Cork gives us a great opportunity to take a look at a group of players who are right on the edge of the senior squad and we also have the likes of David Strettle and Freddie Burns, who are very much in our thinking as options going forward.

“We will be without Joe Launchbury and Ben [MORGAN]and it was a real shame to see Ben Foden pick up his injury up last weekend. We will continue to work with Northampton Saints and Leicester Tigers with Courtney and Manu and see where they are as the Six Nations progresses.”

Joe Schmidt’s Ireland squad will be named on Thursday.