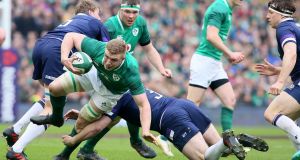 Dan Leavy epitomises the insouciance of youth, distilling the prospect of winning a Grand Slam at Twickenham next Saturday to a base form, a game of rugby. There’s no room for pomp and circumstance, instead prioritising the detail of performance, a micro picture on a macro backdrop.

There is no artifice in his answers nor is he calculatingly blasé. The modern generation of young Irish rugby players have grown up watching a national side win Six Nations Championship titles, Triple Crowns and in 2009 a Grand Slam. They haven’t witnessed the hardscrabble days of Wooden Spoons or when Irish victories in the tournament resembled hen’s teeth.

As a 14-year-old when Ireland won the 2009 Grand Slam, he watched the match at home with his family but his observation that: “It was so long ago, I can’t really remember,” is slightly disconcerting to those who can still recall the technicolour detail.

Leavy, now 23, continued: “I was pretty young, but it is always coming up on clips and stuff so it would be special.”

He’s never played at Twickenham, never been to the stadium and the only thing that will preoccupy him in the build-up is making sure that he has attended to the detail that Ireland coach Joe Schmidt demands. Even when it’s pointed out that the last time Ireland won away to France and England in the tournament was 45-years ago (1972), he smiled: “It’s a game of rugby.

“There’s more on the line but it doesn’t change my approach. I will just go out and do the best I can. Hopefully we’ll get some silverware at the end of it. The Irish-English games are huge regardless of what’s on the line. You always go out to win regardless of the situation.

“If we hadn’t won one game we were still going to go out to win [against them]. It’s huge and they will want to get one back at us after what we did last year.”

He played against some of the England players at underage level, beating them 17-3 in the Schools international.

“Yeah, I played a few of them, Maro [Itoje]), Jack Nowell, [Henry] Slade and Anthony Watson. They are all quality operators so we will have to be on the top of our game.

“We [Ireland squad] said as a group we want to do something special and we have an opportunity to do that. Last year England came over to us and we tried to muddy up their celebrations; they will do the same to us so we have to be prepared.”

In such a freewheeling expansive game, against a highly regarded Scottish backrow who excelled at the breakdown against England, he was satisfied to wrangle one penalty turnover and come within a fingernail of a couple of others; albeit that he prised the ball loose too on a couple of occasions.

He preferred though to celebrate the improvement of the Irish defence.

“We just spoke about letting teams back into the game and stuff, making silly errors when we get a little bit fatigued but I think it is getting better. To allow one try against such a strong attacking team with [Stuart] Hogg and the boys out wide who are so dangerous, it is a step in the right direction.”

And another one to take next Saturday.