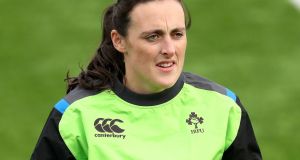 Hannah Tyrrell during the Ireland Women’s captain’s run, in Donnybrook, Dublin. Player returns to the wing for the Scotland clash. Photograph: Oisin Keniry/Inpho

Different standards. Ireland are set to remain mid-table as their Six Nations campaign achieves mediocre status with an expected win in the last Sunday lunchtime fixture of a transitionary season.

Scotland, in stark contrast, will probably stay on course for a Wooden Spoon showdown in Italy.

New national coach Adam Griggs has made two changes to the side that beat Wales with Hannah Tyrrell returning to the wing and Cliodhna Moloney starting at hooker. Sevens flyers Ashleigh Baxter and Louise Galvin are named on the bench.

“We came away with a good win against Wales and there are some huge positives to come out of that,” said Griggs following the 35-12 victory that at least halts the downward spiral following last year’s disastrous World Cup.

“We are in a good place going into the final two games. If we replicate our last performance, get the small things right, I am confident we will have a successful outcome.”

A tough evening is promised in Coventry against England next Friday – depending on tonight’s championship decider in Grenoble, the Red Roses could be chasing another Grand Slam – but respectability for Ireland should be secured with a third victory in Donnybrook.