Second in the world, 11 wins in a row: heady days for Ireland indeed 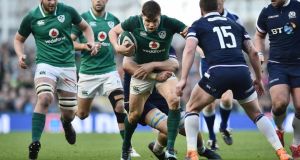 To the victor the spoils at Lansdowne Road, and the right to view the performance through the prism of victory first and foremost; to enjoy the win as a standalone and all it entails going forward before examining the imperfections. Ireland are now ranked second in the world after this victory (which will be officially announced on Monday). It’s a pretty heady achievement.

Joe Schmidt’s side had to beat a Scotland team travelling to Dublin with a fair wind based on a fine victory over England in the previous rounds, one that would challenge the home team in every aspect of the game and this they did.

The home side had three players returning from injury and after a first half where the gears were grinding a little in terms of some of the handling and kicking from an attacking perspective, Ireland, with a little recalibration, eased their way to a bonus point win.

The Scots did butcher a couple of gilt edged try scoring chances but Ireland left a couple behind them too, the home side thoroughly deserving winners based on the 80-minutes. An 11th win in a row is a new Irish record eclipsing the mark of 10 victories during Eddie O’Sullivan’s reign. A Grand Slam beckons on Saturday week at Twickenham, an opportunity to emulate the class of 1948 and 2009.

The first issue and one that supersedes any critical evaluation of Ireland’s performance is an incident involving Cian Healy where he took where he took a forearm/shoulder to the temple area of the head in tackling Scotland fullback Stuart Hogg just short of 35-minutes into the first half. The prop is prone, face down, for several seconds as a result of the collision.

The game continues while Healy is receiving treatment but then when play switches back to where he is on the ground, the Irish prop tries to regain his feet to join the defensive line and in doing so, staggers forward with little control over his balance. He acts as a pillar for two rucks and then one minute and 10 seconds after the initial collision he carries into a huge double tackle.

In the space of two minutes Healy is attended to three times. He should have been withdrawn for a Head Injury Aassessment (HIA). There is no ambiguity, it doesn’t matter what ailment he claims he has, he should have been removed and his situation reviewed and appraised off the pitch. The player is clearly staggering based on potentially having sustained a concussive impact to his head.

The irony of an article on the IRFU’s launch of new concussion guide for coaches and parents in the match programme didn’t escape observation. Medical opinion may subsequently reject the suggestion that Healy had suffered a concussive blow but watching a player lurching around trying to regain his balance suggests that the only course of action that should have been taken was to remove the Healy for a HIA.

Ireland’s employed clever use of the inside pass having analysed the way Scotland defended and the weaknesses they showed in the area around the 10 channel on the opening weekend defeat to Wales. The rewind play for Garry Ringrose’s superb first half break, the use of Keith Earls and Jacob Stockdale coming off their respective wings to raid down that channel was very effective. It proved quite a lucrative gambit as did a number of inside passes eking out space close the rucks. The change of direction caught the Scots out on several occasion.

Another example of effective strategy was manoeuvring Rob Kearney into the position of the primary chaser of garryowens, something he did very effectively all afternoon, winning ball or forcing errors.

Ireland’s lineout maul was absolutely outstanding on the day, well organised, co-ordinated, quickly set and powerfully driven and a central tenet in two (Conor Murray and Sean Cronin) of the four tries scored. It should be noted that the Scots were excellent in defending the English maul so a chapeau tip to forwards coach Simon Easterby and the Irish pack for bringing the training ground precision to the match environment.

The scrum was also efficient and while the Scots did manage several penalty turnovers at the breakdown, their rate of pilfering was nothing like they managed against England.

Ireland defence coach Andy Farrell will be happier - not happy - with most of Ireland’s work in defence. There were a few missed tackles that were individual rather than system errors and in this respect some of the reads weren’t great, especially for the Blair Kinghorn try, where the home side had enough numbers to defend the attack.

What was interesting to note was the fact that Ireland tweaked their defence for the match, a little softer in line speed and a little more of a drift defence rather than the aggressive, hard charging line they have presented in previous matches.

Six games this season, one, against the Southern Kings since returning from his ankle surgery, and Garry Ringrose produces a performance of extraordinary quality in the Test arena. He gave Ireland a cutting edge when they were struggling to open up the Scots and during a first half in which the home side racked up seven handling mistakes that undermined their ambition. In the second half they made none and were more fluent in their patterns.

It wasn’t just in attack that Ringrose excelled as his ability to largely shut down the wider channels against a Scottish side that had been so devastating in this area against England made it all the more laudable for the young Irish centre.

The English referee deserves huge credit for the manner in which he handled the game. His communication with the players was first class, leaving them in doubt about what he wanted and also in explaining his decisions. He was clear, concise and consistent. This season’s Six Nations has been slightly pockmarked by some indifferent officiating but Wayne Barnes’ performance at Lansdowne Road on Saturday was conspicuously excellent.

Jacob Stockdale’s remarkable try scoring feat, six so far in this season’s Six Nations Championship, breaks an Irish record that was previously jointly held by Jack Arigho and Tommy Bowe, who had set the benchmark five apiece in the tournament and in the case of the former its previous incarnation, the Five Nations Championship.

Arigho was born in 1907 and marked his Irish debut in 1928 as a 20-year-old with two tries against France in Belfast in a game Ireland won 12-8. He scored his third try in the next game against England and despite missing the game against Scotland through injury scored another brace of tries in a 13-10 victory over Wales.

He went on to win 16 caps for Ireland and was a member of a Lansdowne team that won five Leinster Senior Cups in a row and three successive Bateman Cups, and in 1931 was part of an all-Lansdowne three quarter line that represented Ireland against Scotland, Wales and South Africa. He also wrote a popular column in the Sunday Press. He died aged 92 in 1999.

His record lasted 84 years before it was matched by Bowe, the Ulster, Ireland and Lions wing, who will retire at the end of the season, scored one against Wales, two against Italy and a brace in Paris against France in the 2012 Six Nations.