Eddie Jones’s honeymoon is over: the British press react 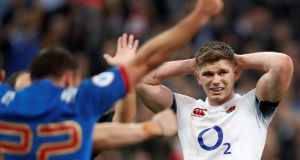 Joe Schmidt’s Ireland are one game away from becoming just the third side in Irish rugby history to win the Grand Slam.

In order to join the history boys of 1948 and 2009 they have one more assignment to tackle - the small matter of a final weekend trip to play England at Twickenham.

There’s a spectacular party in the offing on St Patrick’s Day if Ireland - already crowned Six Nations champions - can see off Eddie Jones’ wounded side and silence English rugby HQ.

And Ireland have every chance of doing so. Saturday’s win over Scotland was their 11th Test victory in a row, and one which has moved them up to second place in the world (when the rankings are officially updated on Monday).

The Scots came to Dublin with their tails up after a stunning Calcutta Cup victory last time out, but they had the life squeezed out of them at the Aviva Stadium.

Schmidt’s side ran in four tries in a clinical performance - albeit one which saw them ride their luck at times.

The bonus-point win, followed by France beating England in Paris later on Saturday afternoon, was enough to secure the Championship - a third in five years following wins in 2014 and 2015.

And this has confirmed a change in the order of northern hemisphere rugby - with Ireland now seen as the side most capable of taking the fight to New Zealand at next year’s Japan World Cup.

Indeed, in the Guardian (UK), Andy Bull writes: “A year on from England’s 13-9 defeat by Ireland in Dublin, their first loss under Jones, that game seems to have been a clear watershed in the fortunes of both teams.

“It was the point when Ireland passed England to become the best team in Europe. Ireland are unbeaten in 11 Tests since and are now Six Nations champions. England are still faltering, looking for the sure footing they had before they tripped in that match.”

Saturday’s loss in Paris was the first time England had been beaten in consecutive games since Eddie Jones took over. A third defeat against Ireland - with their visitors securing the Grand Slam in the process - would plunge them into crisis.

And in the Daily Mail (UK), Clive Woodward suggests Jones is about to face the most difficult period of his stewardship, he writes: “England face a very difficult week. Eddie Jones’s honeymoon is over, he is about to experience the other side of being the England coach.

“The Six Nations is an unforgiving arena and they now face a rampant Ireland, gunning for the Grand Slam on St Patrick’s Day at Twickenham.

“Lose that, which is very possible, and, as defending champions, England will have finished with only two victories. That is poor and unacceptable, given the investment in the team and their huge advantage in playing numbers and strength in depth. Jones has huge credit in the bank but these will be tricky times.”

And he also believes Ireland are well deserving of the Championship: “Ireland have been the class team of the tournament and fully deserve the title a week ahead of time. They came through their one average performance, away to France, with that superb late Johnny Sexton drop goal and have got better and better.”

Meanwhile, in the Telegraph (UK), Mick Cleary gave a pretty brutal assessment of England’s efforts: “England were emasculated in Paris, 22-16, failing the test of manhood that Eddie Jones had set them, unable to prove that they had any sort of virility in their game.

“Their title defence is over and a splinter of doubt has been driven hard into the heart of English rugby, an apprehension that this is déjà vu all over again, that a side with supposed World Cup credentials is not all that it is cracked up to be.”

And his sentiments are echoed by chief sports writer Paul Hayward: “Three defeats in five NatWest Six Nations matches is an almost incomprehensible slide for a team supposedly gunning for New Zealand and the 2019 World Cup.

“‘Phase two’ of Eddie Jones’s reign has become ‘square one.’ Jones is now back where he started in the quest to transform Europe’s best-resourced nation into a conquering force.”

As the English inquest continues, the Scots can afford to be more quietly reflective after their defeat to Ireland. Their terrible record away from home in the Six Nations might have continued but wins against France and England mean this campaign will go down as a successful one.

However, the visitors butchered a number of golden chances in Dublin - and Gregor Townsend will rue his side didn’t have the ruthless edge which has become a hallmark of Ireland’s game.

And in the Scotsman, Iain Morrison writes: “Well, no one can complain that they didn’t get their money’s worth. This was high-tempo, highly skilled, engaging and exciting; Test match rugby at its compelling best. Anyone who was worried about Ireland sticking the ball up their jerseys and driving Scotland to distraction was pleasantly surprised...

“...The high tempo had the desired effect, because Ireland were blowing hard and made a number of errors, but nothing like the number that Scotland made.

“Scotland lost on the road…again…but it wasn’t for a want of opportunities. They created plenty of try-scoring chances but simply couldn’t convert enough of them.”

And so, to Twickenham, with the tables firmly turned. England have the chance to do to Ireland what Ireland did to them last year.

As Andy Bull (Guardian UK) writes: “Ireland found enough motivation in the idea of stopping England from winning the grand slam, and proving themselves to be a better side than they had shown in the tournament so far.

“Jones will hope England do too, that perhaps this game can be a turning point, just like the last game between the two teams.”