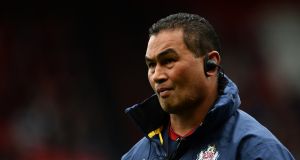 Bristol head coach Pat Lam said he expects some household names to come through Bristol’s academy in the next five to 10 years. Photograph: Harry Trump/Getty Images

“Can you come here and do what you did in Connacht?” That was Pat Lam’s outline of what Bristol Rugby asked him to do when he confirmed his decision to leave the Irish province in December 2016.

Over four years, the Samoan had transformed Connacht from the “poor relation” of the Irish game into Pro12 champions while playing an often thrilling brand of attacking rugby.

Speaking on Thursday at Ashton Gate Stadium, Lam insisted he had “no plan or intention to leave Ireland”, but his enthusiasm about what he and his staff are building at the West Country club was obvious.

“The biggest thing about our vision is we want to be a Champions Cup team, we want players to play for England and we want Bristolians.”

Bristol have lost only once in the English Championship and are well on the way to returning to the top flight for only the second time in 10 seasons.

Mark Tainton, the club’s chief operations officer and record point-scorer, says that since his debut at 17 in 1983, the club has gone “full circle from really, really amateur, training twice a week, in pullovers on a muddy pitch, to the state-of-the-art stadium we’ve got at Ashton Gate”.

The backing of financial services billionaire Stephen Lansdown is largely responsible for that and he made Lam one of the best-paid coaches in European rugby with the aim of seeing the off-field transformation replicated on the pitch.

The recruitment of Ireland outhalf Ian Madigan, who Lam says is a “privilege” to work with, was a sign of that ambition and he is part of a growing Irish influence at the club.

Conor McPhillips, Lam’s assistant at Connacht and someone he believes can go on to be “a world-class coach”, has joined him. It has also been reported that John Muldoon will become a coach at the club next year. Lam dismissed those reports as “one of many rumours”.

Former Leinster hooker Jason Harris-Wright has played a big role for the club this season and he says having a few Irish people around, including his brother Jonathan, who is a strength and conditioning coach, means we’re “probably not getting slagged as much as usually”.

The club recently announced a host of new signings for next season including Connacht flanker Jake Heenan. Another former Connacht player, Aly Muldowney, will join Ireland international Dan Tuohy in the secondrow.

As Tainton says though, Bristol “can compete at the high end for some of the best players in the world” shown by the addition of All Black flanker Steven Luatua to the side in August, someone Harris-Wright has been hugely impressed by.

“He’s a bit of a freak in that he doesn’t really have any weaknesses to his game… He’s been a huge asset for us.”

Two players with Ulster connections, John Afoa and Charles Piutau, will arrive next season. Piutau is likely to become the best-paid player at the club although they insist reports suggesting he will be on a seven-figure salary are inaccurate.

Lam is “100 per cent committed” to the club and is encouraged by the “unbelievable talent” in the academy, saying he expects some household names to come through in the next five to 10 years.

There are plans to develop a new training ground, which former Ireland kicking coach Tainton believes shows the owners’ “intent for the long term”, to go with what he says is one of the best rugby stadiums in the United Kingdom, which they share with Bristol City football club.

Lam is keen to stress the importance of the community work the club is doing as having the money to attract some big names is not enough to ensure success.

“You might have players that have experienced more or be perceived as a better quality player but that doesn’t win you championships. Otherwise it’d be an individual sport, it’s a team sport. Everything’s about bringing the team together, bringing players together, being part of a bigger cause. That’s why community work is important and you saw that in Connacht. You got the whole province behind the team because the team got behind the province and it’s exactly the same here in Bristol.

“I’m hugely excited, I said when was in Ireland, I’m a big dreamer. People laughed at me when I said we could win this thing [the Pro12]. People laughed at Connacht… People now think Bristol is always down here but I can see it and I’m dreaming of where it can go. That’s because we’ve got clarity on our vision, we’ve got a lot of good people doing a lot of good work. We’re all behind it. We understand the direction that bus is going and we’re all choosing to be on it.”

1 Ireland 23 Georgia 10: How the Irish players rated
2 Ireland grind their way to grisly win over Georgia
3 No fireworks but Limerick get the job done against Galway
4 Ireland’s autumn of discontent continues with abysmal Georgia showing
5 Jim McGuinness: There is a way to save championship and make it competitive
Real news has value SUBSCRIBE

No fireworks but Limerick get the job done against Galway 19:49
Billy Burns provides silver lining to gloomy Ireland display 19:57
Ireland’s autumn of discontent continues with abysmal Georgia showing 19:24
Chelsea and Tottenham draw a blank at Stamford Bridge 19:04
Andy Farrell: Ireland’s Georgia showing was ‘not good enough’ 18:36
Crossword Get access to over 6,000 interactive crosswords