CJ Stander among nominees for try of the year 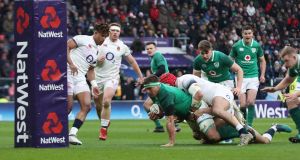 Ireland’s CJ Stander scores a try against England which has been nominated for the International Rugby Players (IRP) Try of the Year award. Photo: Billy Stickland/Inpho

CJ Stander could become just the third Irish player in 12 years to win the International Rugby Players (IRP) Try of the Year .

The Ireland number eight has been nominated for the award thanks to his finishing off a beautiful Irish move during the Grand Slam-clinching win at Twickenham.

The shortlist for @IntRugbyPlayers Try of the Year has been announced, featuring tries from @IrishRugby @AllBlacks and @Scotlandteam

The winner will be announced on 25 November at the #WorldRugbyAwards

Which try do you think should win it? pic.twitter.com/fPgNwl28uF

Tadhg Furlong’s impressive handling and Bundee Aki’s assist are remembered just as much as Stander’s finish as he was hauled down short by Richard Wigglesworth and James Haskell but managed to wriggle his way over.

Jamie Heaslip took home the award two years ago for his effort against Italy while Brian O’Driscoll won in 2008 for his try against Australia.

The winner will be announced next month and Stander faces stiff competition from Scotland’s Sean Maitland (for his try which also came against England), All Black Beauden Barrett (who scored against Australia) and fellow All Black Brodie Retallick (who also went over against the Wallabies).