Siya Kolisi and South Africa speaking to the hope of 1995

Mandela didn’t lead South African rugby to the mountain top, he gave a glimpse of it 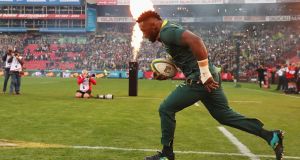 There are people who believe Nelson Mandela died years before he really did, who swear they remember reading about his funeral in the 1980s, hearing it on the radio, even watching it on TV. It is such a common mistake that the phenomenon’s got its own name: the “Mandela effect”. Time was when that phrase would have carried very different connotations.

It might have described Mandela’s galvanising influence in moments such as the 1995 World Cup final, when he famously dressed in François Pienaar’s spare Springbok jersey to present the South Africa team with the Webb Ellis Cup, and when, Mandela said later, South Africa celebrated as “one nation uniting behind our victorious team”.

Here, too, our collective memory, shaped by Clint Eastwood’s Hollywood history Invictus, has grown a little warped and distorted. A lot of South Africans will tell you that the sense of unity Mandela’s gesture engendered was alive so briefly that they cannot be sure it really existed at all.

What is less well remembered now is that in the three years after that match there were so many racist scandals in the team Mandela set up a commission of inquiry into racism in rugby, and that the head of the union, Dr Louis Luyt, was so angry about it that he forced Mandela in to court to defend the decision. Mandela did not lead South African rugby to the mountain top in ’95, he gave a glimpse of it in the distance.

South African rugby seems to have spent the past 23 years trying to make good on the promise of ‘95, to prove that a game dominated by white men can redefine itself as a national sport in a country where 91 per cent of the population is either black, mixed race, or Indian-South African.

This summer the Springboks took another step forwards when they appointed their first black captain, Siya Kolisi. Chiliboy Ralepelle had led South Africa in a midweek game against a World XI in 2006 but Kolisi is the first to do it in a full Test. When Rassie Erasmus announced the appointment, the Springbok coach said Kolisi’s blackness was incidental. But it was also inescapable.

The very next day Desmond Tutu came out of his retirement from public life to talk about it. “The appointment,” Tutu said, “is a wonderful achievement that makes us walk very tall. It speaks to the hope we felt 24 years ago that we were developing a special society in which the cream would rise to the top regardless of colour or class.” He added, in Afrikaans: “Thank you, Rassie, for your wise decision.”

After South Africa won that first Test, the president, Cyril Ramaphosa, announced that he would attend their next. It was played on June 16th, Youth Day, when South Africans commemorate the Soweto uprising of 1976. The sports minister, Tokozile Xasa, explicitly linked the two. “The Springboks victory will be a befitting tribute to our heroes.”

On the other side of the divide, there were those, mostly on social media, who argued this was a political appointment, or quota tokenism. Black players have carried that tag, “quota player”, ever since transformation started in the 1990s. There is an understanding, now, that this stigmatisation was a side-effect of the blunt way in which the government tried to impose racial quotas on national teams in the 90s and 2000s. Xasa has described that old policy as “a one-size fits all oversimplification” which relied too much on the idea that if they forced change at the top it would then trickle down to the bottom. Another problem with it was that they were relying on moral arguments to make their case.

Those quotas still exist. Only when Kolisi’s Springboks beat the All Blacks in New Zealand this September – something that no team apart from the British & Irish Lions had managed to do this decade – did no one complain about the effect they had on the team’s performance.

The moral argument behind the quotas still stands, too. Erasmus has said he has “always understood all the transformation issues and that they are part of the way we are heading and I have bought into that. We are trying to fix all the wrong things that were done in the past.”

But now there is a strategic argument for quotas, too, laid out in annual reports by the Eminent Persons Group appointed to monitor the transformation process. The demographics of South Africa are changing. The white population is shrinking and is projected to fall to just two million by 2045. Sports that do not adapt to that will die out.

There is an emphasis now on pushing through transformation at the school level, too. It is estimated that only 8 per cent of South African schoolkids have access to sport. Kolisi is lucky that he was one of them. He got his chance because scouts from Grey high school in Port Elizabeth spotted him playing in a township rugby tournament and gave him a scholarship.

Kolisi describes himself as having grown up in two homes: a township shack and a dorm room in an elite boarding school, and he sees himself as a product of both. His career is testament to what transformation can achieve. And he is determined to work to help more people benefit from the sort of opportunities he had. Only he does not want them to have to leave their homes to find them, as he did.

The job is a hard one. South Africa had lost almost every other game they had played in the two years before he became captain. On top of that, as Erasmus recently admitted, Kolisi “was under enormous emotional pressure because of the magnitude of his appointment and people made a really big deal about, which affected his game a little bit”.

But he is not a man to buck a challenge. There is a story his old teachers love to tell. It happened right after he arrived at Grey. He could not swim and had only been in a pool twice in his life, but still decided to try out for the water polo team. “I used to see my schoolmates diving into the pool,” he has said, “and I assumed it was the easiest thing in the world.” He jumped in, sank down and “almost drowned”. When pulled out of the water, he smiled. “Jeez,” he said, “that’s not as easy as it looks.”

It is not clear yet whether Kolisi will lead the team into next year’s World Cup in Japan. But whether he does or not, he is helping to drive through a generational change in the game. Kolisi wears the same No 6 jersey Mandela once did, but was four years old when South Africa won the World Cup. Just two months ago, the current president of South Africa Rugby, Mark Alexander, appeared before a parliamentary committee on sport and recreation. “I have a video on my phone which was taken at one of SA Rugby’s youth weeks where several young boys from different backgrounds sing and dance together,” Alexander said. “This tells the story that South Africa has moved on. There was no racism among these boys.” It is the older generation, he said, that “are the racists. We’ve got baggage. The youngsters don’t have baggage.”

They surely still do, but it’s growing lighter every year.