Ulster’s Kieran Treadwell the only absentee due to delayed flight 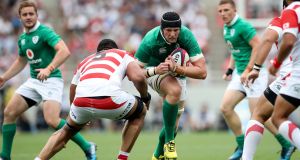 Kieran Treadwell will join up with the Ireland squad on Wednesday. Photograph: Ryan Byrne/Inpho

Ireland have no injury concerns ahead of their opening November test series match against South Africa at the Aviva stadium on Saturday (5.30pm).

Ulster secondrow Kieran Treadwell, who celebrates his 22nd birthday today, was the only player missing from Ireland training on Monday afternoon after his flight from South Africa was delayed. He played in Ulster’s victory over the Southern Kings on Saturday.

He won’t get back into Ireland until late Tuesday afternoon and will not return to Ireland camp until Wednesday evening. Treadwell won his two caps during the summer tour, coming on as a replacement in the first test against Japan and starting the second. The remaining 37 players trained at Carton House.

Keith Earls offered an overview of life in the Irish camp that was reconstituted last week. “We had a great week last week with the whole squad back together. It was the first time for the Lions boys and the Ireland camp from the summer coming back together. There are a lot of new faces.

“It’s a like a completely new squad with a few older heads. I’m the older fella which is bizarre. Even with 60 plus caps you still get excited match week, you still get nervous.”

Having played against South Africa three times (in 2016) he fully understands the challenge they pose. “The physicality you’d be battered playing against them. They have been together for a couple of months now and they’re on the up (in terms of performance).”