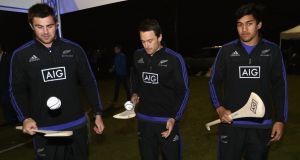 All Blacks Liam Squire, Ben Smith and Rieko Ioane try their hand at hurling during a visit to Castleknock College in Dublin. Photograph: Phil Walter/Getty Images

It has always been one of the more elusive subjects in sport, if not life itself: is it any craic being an All Black?

Take this evening. Your name might be Brodie or Israel or Dane and you are sitting in the dressing-room at Lansdowne Road, taping up your wrists and checking your boots. And nobody is saying very much because you’ve been planning and training and obsessing over this match all week. You want to get out there, on the field.

And you know that outside, a beery sky is threatening blue murder and the Irish, those incessantly mad bastards, are already on their one thousandth rendition of The Fields of Athenry – with feeling.

You have just put on your jersey. And that black jersey is one of the great sporting uniforms: like the Brazil football top or the pinstripe grey of the Yankees, its prestige and meaning travel far beyond the natural borders of the sport it belongs to. Thankfully, the marketers and shirt-sellers can’t really tamper with it.

It is what it is: a black jersey, matched with black shorts and black socks, a uniform that sits safely outside the vagaries of fashion or sponsors’ whims. It stands for enduring excellence and perpetual ambition. And it may carry on its back one of rugby’s prestige positions – the # 15 or 10 or 8 or 2 – but no matter how many caps you have won, you understand that you are only passing through this jersey: that it is permanent and the players who fill it come and go and that no matter how big the actual square footage space of any New Zealand dressing room, it is always crowded, absolutely cluttered with the standards set and stories told of New Zealand rugby men who came before, from Dave Gallaher through to the All Blacks era of Colin Meads or Ian Kirkpatrick or Grant Fox.

Pull on that All Blacks jersey and you are immediately evoking any All Black moment you care to summon, from Jonah Lomu’s jaw-dropping turn as human panzer tank in 1995 to Christian Cullen’s bullet-headed directness to Carlos Spencer flicking a pass through his legs for the pure bloody mischief of it.

You are part of an All Blacks team which had, until November 5th, won 18 games on the trot but you know that right now, on this Saturday afternoon, it’s not the wins that everybody at home is talking about; it’s that bloody defeat. You aren’t part of a record winning team anymore. You are part of the first New Zealand side to have lost to Ireland for the first time in 100 bloody years.

This game is going out at 6.30 in the morning at home: New Zealanders are either going to be cranky at having to rise early on a Sunday morning or will be feeling no pain having partied their way through the night. And in South Africa and Oz, they are going to keep a close eye on this too to see if an hour of delightful, grim history can be made; to see New Zealand beaten twice on the bounce – by Ireland.

What happened in Chicago? That game was, of course, on one level, a brilliant wheeze: a tentative step into the untapped oil well of world rugby, the US of A.

It was both sublime good fortune and pure bad luck that the game happened to coincide with the Cubs’ first World Series title in 100 years. For rugby fans living in and visiting the city, it must have created a magical, unreal atmosphere.

Steve Hansen, the All Blacks coach, noted with no particular delight, that his players had spent the Friday morning among the the estimated five million (!) fans who turned out for the parade.

That in itself must have been disorienting for the All Blacks players. Professional sports exist in separate universes of money, sponsorship, audience and prestige. When the All Blacks arrive in one of the traditional rugby cities of the world, they are accustomed to being the show. That was never going to be the case in Chicago, even without the delirium caused by the city baseball club.

By virtue of being caught up in the scale and intensity of the Chicago celebration, the All Blacks were removed from their normal environment and were forced to confront their relative obscurity in the wider world of sport.

Just before last year’s World Cup, Zinzan Brooke, the freewheeling number eight who personified the best of All Blacks rugby in his era, reckoned that it was only a matter of time before the USA won the World Cup.

It is scary for all other rugby countries to think about the potential of the USA, with its population of 300 million, to become a force in rugby. Imagine a stream of just-outside-the-NFL or NBA-calibre athletes being directed to careers in rugby union in their mid-teens. New Zealand-Ireland in Chicago was an ideal chance to showcase the game and not only was it obscured by the local sport, the All Blacks blew it by losing to the team whose fanbase had clearly snapped up most of the tickets.

They said complimentary things about the Irish performance through slightly gritted teeth and then concentrated on the litany of shortcomings and unhappiness with how they represented that jersey and New Zealand rugby culture for those 80 minutes.

Losing games – and more specifically, losing to Ireland – is not a reality that All Blacks rugby players are encouraged to enter. That defeat is in the record books now: it cannot be erased. And the All Blacks are overwhelming favourites to reverse the result in front of what will be a jubilantly partisan crowd in Dublin.

How can you measure the sense of internal pressure on any of those All Blacks right now – at 4.45pm, say, with the anticipation around the stadium turning suitably heathen in mood?

Rugby, as a concept, demanded that the All Blacks step over the faultline from glorious amateurism to absolute professionalism without missing a step. New Zealand’s role was constant: to be, in a way, the big bad wolf of rugby and give the sport it’s darkly, majestic unsmiling victors; the country and team that showed up, winter after winter, with winning on its mind. It’s faintly miraculous that they have, with a population of less than five million, succeeded in doing this.

There has always been something appealing about Jean-Pierre Rive’s observation that rugby is, first and foremost, a state of mind, a spirit. And within the New Zealand dressing room just now, the mindset must be that they simply can’t lose here: that losing to Ireland is to all intents forbidden. Maybe its a mindset that leaves a chink which Ireland can exploit. But brace yourselves from the moment they line up for the haka.

Something wicked this way comes.