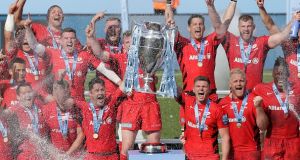 English Premiership clubs could, in future, be suspended, stripped of their titles and forced to return any prize money. Photograph: Getty Images

England’s leading rugby clubs have been warned that a fundamental change in attitude is needed to restore public trust in the wake of the Saracens salary cap affair. An independent review undertaken by Paul Myners also makes a raft of significant recommendations, including stripping titles from clubs found guilty of cheating their way to silverware.

Myners’s comprehensive 55-page report takes an axe to large chunks of Premiership Rugby’s existing salary cap regulations and makes clear that attempts to cherry pick from the 52 recommended improvements would further undermine faith in the competition and those administering it.

Among the suggestions is that clubs could, in future, be suspended, stripped of their titles and forced to return any prize money, that marquee player exemptions should be abolished and that players be required to produce their tax returns or bank statements if any breach of regulations is suspected. The PRL board has also been urged to become more accountable and more transparent in how it communicates and to grant its salary cap director extended investigatory powers.

It is also proposed to introduce a fit and proper test for club owners and to require them to sign a copy of the regulations to indicate their intention to abide by them, with potential lifetime bans for serial offenders. Random mini-audits of clubs’ books would also be introduced, with all co-investments with players banned and player loans to other clubs more strictly policed.

Perhaps most striking of all is the report’s conclusion, which suggests that an insidious culture of rule-bending and legal nit-picking has become de rigeur in top-level English club administration, dating back to the decision in 2015 to brush under the carpet previous serious salary cap breaches involving Saracens and another Premiership club, widely reported to be Bath.

“It is important that my recommendations should be viewed as a package of measures which, if taken together, will go a long way to restoring the integrity of the regulations,” Myners wrote. “They should not be viewed as a menu of options from which to pick and choose.

“If any club or other participant in professional club rugby seeks to use the legal definition of certain terminology to get around the clear intentions of these recommendations then they have entirely missed the point of this exercise and failed to learn the lesson of this painful episode. For PRL to fall short of those commitments in the pursuit of narrower interests would be detrimental to its reputation and consequently to its ability to trade at the highest commercial level possible.”

The report reveals that “fiasco” and “shambles” frequently cropped up in feedback from the 450 individuals and organisations who contributed to the review and that it was “overwhelmingly clear … that trust has been damaged”. Even the decision to deduct Saracens a total of 105 points to ensure relegation to the Championship in addition to a fine of £5.36m was technically flawed as it involved fellow clubs acting as judge and jury rather than independent justice being seen to be served.

The recruitment of expensive marquee players is also singled out for its inflationary effect on wages across the sport. The number of players costing their clubs at least £300,000 per year has risen from five in the 2013-14 season to 99 in 2019-20, with the 24 marquee players costing their mostly loss-making clubs a total of £14m in 2019-20. Premiership Rugby’s chief executive, Darren Childs, said the clubs would now be consulted with a view to introducing a fresh set of regulations.

It comes at a time when rugby is already staring into the financial abyss courtesy of the coronavirus crisis.