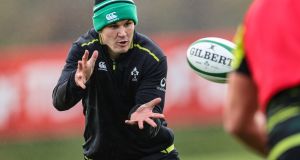 Johnny Sexton is back in training ahead of the weekend’s match against Scotland. File photograph: Inpho

Billy Burns and James Lowe have been ruled out of Ireland’s Autumn Nations Cup third-place play-off with Scotland through injury, the Irish Rugby Football Union has announced.

Outhalf Burns has not recovered from a groin problem suffered in Sunday’s win over Georgia, while winger Lowe will be absent due to a similar issue.

Captain Johnny Sexton and centre Robbie Henshaw should be in contention to play on Saturday having returned to training following their respective hamstring and groin injuries.

Flanker Will Connors will continue to be monitored after being forced off for a head injury assessment during the 23-10 victory over the Lelos.

Prop Ed Byrne will remain out due to an ongoing calf issue, while uncapped duo Harry Byrne and Eric O’Sullivan will train with the squad this week.