French top flight a significant challenge for Zebo and Jackson 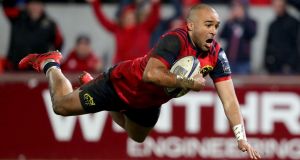 Simon Zebo: will begin a new chapter in his career later this month with Racing 92 in the French Top 14 Championship. Photograph: Dan Sheridan/Inpho

On Saturday, August 25th two Irish players Simon Zebo and Paddy Jackson are scheduled to make their respective debuts in the opening round of fixtures in the French Top 14 Championship.

Zebo is expected to be part of the Racing 92 squad that travels to Toulon while 250 miles down the road Jackson will be hoping to be part of a newly-promoted Perpignan team that will host Stade Francais at the Stade Aime Giral.

The 26-year-old Jackson, released from his Ulster and Ireland contracts, agreed a two-year deal at Perpignan while Zebo (27), who recently scored a try on his Racing debut against Brazil in Georgia, joins his fellow Munster man, Donnacha Ryan at the Parisian club.

Continuing with the Munster theme, former scrumhalf Mike Prendergast, who previously worked with Grenoble and Oyonnax in the French Top 14, is now the backs’ coach with Stade Francais.

Dave Foley, Paddy Butler and Sean Dougall, all Pau, hooker Duncan Casey (Grenoble), prop Dave Ryan (Agen), Zebo and Donnacha Ryan are all former Munster players and along with Jackson make up the Irish contingent in the Top 14 for the upcoming season.

In the French Pro D2, Jeremy Davidson has taken over as head coach at Brive having left his role as forwards’ coach at Bordeaux and one of his first signings was Stuart Olding.

While the remaining Irish players in that division have experience of French rugby, former Irish international Dan Tuohy, signed for Vannes from the newly promoted Aviva Premiership club, the Bristol Bears.

Ian Costello joins the Wasps coaching team from Nottingham while Connacht stalwart, John Muldoon, who retired as a player at the end of last season has linked up with Pat Lam’s Bristol as defence coach.

One good news story is the return to competitive rugby of Ireland U-20 international Niall Saunders, son of former Irish international scrumhalf Rob, who after taking a year out through illness has won a place back in the Harlequins academy.

The talented scrumhalf said in a recent interview: “I’m very excited to have re-signed for the club after what had happened last year, it was something I knew would be a long and tough road back, not only emotionally and mentally but physically as well.

“It’s great to be back in the environment of so many world-class players, to feed off their knowledge and to also work out why they’re at the top of their game, especially the likes of Danny [Care]; someone I think plays the most exciting rugby as a nine in world rugby. It’s been a massive learning curve for myself and I feel I’ve come out stronger in all aspects.”

A couple of former Ulster players, prop Callum Black and scrumhalf Michael Heaney, moved to the Worcester Warriors, a case of returning home for Black.

In the English Championship the greening of Nottingham continues with the arrival of the Irish-born, Canadian international Shane O’Leary and former Leinster academy prop and underage international Oisín Heffernan. There are eight Irish players at the club.

Dundalk ready to take on Arsenal; Tyrone facing Conor McKenna dilemma 07:22
Ireland, France or England? Who needs what to win the 2020 Six Nations 07:00
America at Large: Golfers guilty of legitimising Trump’s toxic regime 06:00
The sky’s the limit and then some for Edel Thornton 06:00
Dundalk not feeling the pressure as they face giants Arsenal 06:00
Crossword Get access to over 6,000 interactive crosswords