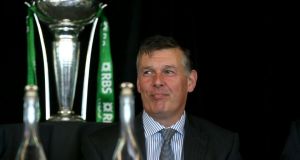 “Over the last six to 12 months long-standing personal relationships between people in this room have been torn apart as the result of the manner in which the process to bring about changes in the laws of this union have been allowed to become flawed and mismanaged,” said Glynn, while endorsing Phil Orr as junior vice-president.

“We have an opportunity to start that process today and elect Philip Orr,” said Glynn before adding: “Philip has the will, he has the ability, he has the manner, he has the personality and most importantly the respect of everybody which will allow him, with others, be successful in repairing the damage done.”

Orr was duly elected ahead of Finbarr Crowley, leaving the 58 times capped prop positioned to succeed Stephen Hilditch as IRFU president in 2017. Hilditch will follow the newly appointed Martin O’Sullivan of UL Bohemians.

When questioned about Glynn’s speech, chief executive Philip Browne stated: “There was an egm about four weeks ago and it was the culmination of about two years of trying to change the laws of the union to make them more appropriate and more streamlined with the realities of modern rugby.

“There was a difference of opinion, which you would have gathered from the meeting, so what we saw there was an expression of democracy around a difference of opinion. Governance, in my view, is something which is not set in stone,” Browne continued. “It can’t be. It must be under constant review, particularly in light of the way the game has evolved and is evolving.

Browne also confirmed an extra €3.2 million set aside for the provinces will be primarily used to keep Irish players at home. “If any of the big French clubs go on a shopping spree we are not in a position to match them,” Browne admitted. “But what we have to do is our damnedest to keep the key players that make our provinces competitive.

“If we don’t do that and our key players are abroad we can’t control their game management. Ultimately that is going to impact the provinces financially.”

Some of this money will go into the academy systems while the club game gets an additional €800,000. This stems from the €8.7 million surplus for the 2014/’15 season following improved 10-year ticket sales, the new Sky Sports deal for November internationals and €4 million in Six Nations prize money.

“It was a mixed year,” warned honorary treasurer Tom Grace. “While we retained the Six Nations and won the women’s title at provincial level it was the first time in five years that we didn’t win a trophy.”

However, projected borrowings have been reduced to €15 million from the 2013 figure of €26 million.

Grace also reported a net cashing operating surplus of €1.2 million, which is an improvement on the €1 million deficit in 2013/’14, but the former head of insolvency at PricewaterhouseCoopers reiterated the potentially catastrophic financial impact of the Government deciding to keep Ireland’s Six Nations matches as free-to-air.

“The danger is that the success that has been built up could wither away very quickly . . . We have no choice but to resist this possibility and call on the rugby public to lend their support.”