Fogarty: McGrath must focus on redeveloping his edge 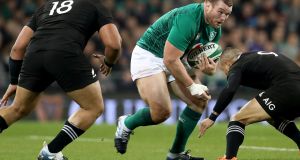 Ireland’s Jack McGrath in action against the All Blacks at the Aviva in November 2018. Photograph: Dan Sheridan/Inpho

Early December last year Jack McGrath had an operation on his hip. Speculation then was that he would miss Leinster’s remaining European Cup pool matches. The Six Nations Championship was in reach. But the loosehead prop who was first choice for Ireland and Leinster between 2016 and 2017 and had a Lions tour under his belt fell out of view. As Ireland shaped up to play England in the first game McGrath was nowhere be seen.

When Joe Schmidt announced his pre-Six Nations squad early last month McGrath was included. But against England Dave Kilcoyne was picked to back up Cian Healy. Scotland was no different and it was Healy again with Andrew Porter, Sean Cronin and Kilcoyne selected to back up Healy, Rory Best and Tadhg Furlong.

McGrath was fit but Schmidt wasn’t picking him. The layoff affected him more than anticipated and since then McGrath’s fitness and the knock-on effect of that, his capacity to play on the edge rugby, has been questioned by Schmidt. He is still a work in progress.

“Yeah I think he’s clear in his head what he has to do,” says former hooker and Leinster coach John Fogarty. “Sometimes we bring players back, medically get them back really, really well. Fitness levels probably haven’t been achieved. Jack was medically really good to come back and play. Probably physically not where he needed to be.

“In terms of leadership in the squad for us and what he can do at the set piece, we’re happy with the way he is moving along and he’s working very, very hard with strength and conditioning to get himself physically good. I think that is what he needs to focus on.”

Fogarty feels that it is well within the scope of McGrath’s ability to get back to where he was. In just over a year between 2016 and 2017, the 29-year-old played in 15 Test matches. That season for Leinster between September and May he started 12 games at loosehead and came off the bench in another six. Third pick is unfamiliar ground.

Dan Leavy is another player on the MIA list, who was expected to have secured an Ireland profile throughout February and March. The 24-year-old’s fearless style of play at flanker has made him a crowd favourite. But again he hasn’t been seen since December as he continues to nurse a calf strain.

Because of data protection legislation Ireland have declined to elaborate on the exact nature of the calf injury. Schmidt may be taking a more cautious approach as the highly regarded flanker remains unavailable again this week along with Rhys Ruddock (hamstring) and Dave Kearney, who presented with minor concussion symptoms after Leinster’s match against Zebre.

Leavy’s last game was on December 22nd against Connacht, when he played for the full 80 minutes. It was his third match that month having played for Leinster in their back-to-back European Cup ties against Bath.

“I’m hearing that he is making good progress,” says Fogarty. “Again he needs to get physically better in certain parts and they’re busy with him at the moment. He’s focusing massively on getting himself back. Initially when there is an injury at this time of year there is a disappointment.

“Now he has consumed himself with getting his body right so that he can stay fit when he comes back. That’s what he is doing at the moment. I think the frustration part is gone. He’s now immersed in all he needs to do, to get himself physically right so that he can be back and stay back.”

Fogarty added that Seán Cronin is more than an impact player Ireland use to spring from the bench. The Leinster hooker has come in for Irish captain Rory Best in Ireland’s opening two Six Nations matches and is among the top try scorers in this season’s Heineken Cup.

Cronin is tied with Jacob Stockdale at the top of the European scoring table on six tries each with Montpelier’s Henry Immelman and Racing 92’ wide men Juan Imhoff and Simon Zebo all in second place with five tries.

“Rory clearly has a huge leadership part in Ireland’s squad,” added Fogarty. “For us here Seán is someone who is a starter. He has started very well for us in the last season and he’s in good form this season. We’re very happy with where he is at.”