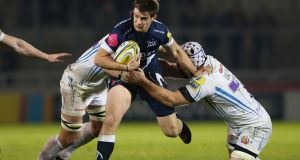 The home side make three changes including the promotion of Anthony Tuitavke to centre and Antoine Claassen at number eight while there opponents welcome back six internationals. Glasgow’s form has been pretty patchy – their opening weekend victory over the Leicester Tigers aside – and although this team represents a truer incarnation of a strong side, Racing should have too much power for the visitors.

Australian colossus Will Skelton is named among the replacements after signing for the London club on a short-term loan. Mark McCall’s side started the Champions Cup with a brilliant win in Toulon and followed up by scoring 44 points against the Scarlets. Sale have lost their two games to date and look more than a bit overmatched. AJ MacGinty starts at outhalf but Peter Stringer doesn’t make the 23.

It’s hard to credit that Toulouse haven’t won a match in their last six Champions Cup fixtures, losing four at the end of the last campaign, beaten by Connacht on the opening weekend of this campaign and managing just a draw against Wasps at home last time out in October. Fortunately for them the Italian side are just the tonic required after such a run, having lost all 13 previous fixtures in the tournament over three seasons.

These protagonists both won away in French Top 14 fixtures last weekend, Montpellier at Bernard Jackman’s Grenoble, and Castres at Lyon. When the sides met earlier in the season in domestic competition, Montpellier prevailed by a couple of scores. The home side has revamped their backline with just scrumhalf Nic White and wing Timoci Nagusa, once of Ulster, retaining their places. Castres make four changes, predominantly up front. This one could be close.

The Scarlets have recovered from an abysmal start to the season to hit a rich vein of form in the Guinness Pro12 and that will give them a little confidence in facing the three-time European champions on their home soil; that and realising that Saracens won here earlier in the campaign. There is no place for the injured Jonathan Davies (hamstring). Toulon are able to swap in and out from their international stable of stars and will know that anything less than a win heading to west Wales won’t suffice.

1 Golf in Level 5 Covid restrictions: Clubs still waiting to hear if they can remain open
2 Hugo Keenan could start in changed Ireland team against Italy
3 Here is your handy guide to sport on television this week
4 Gerry Thornley: After 32 weeks the Six Nations is back up for grabs
5 The Offload: Spectre of doping hangs heavy over South African rugby
Real news has value SUBSCRIBE