Ulster fight back quashed as Clermont take control of Pool 5 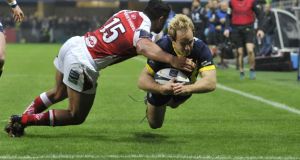 Clermont winger Nick Abendanon gets through the tackle of Ulster fullback Charles Piutau to score a try in the Champions Cup game at Stade Marcel-Michelin. Photograph: Thierry Zocolan/Inpho/Presseye/

A rueful Les Kiss saw his Ulster side return from the Auvergne with no points after a 38-19 defeat to Clermont in the Stade Marcel Michelin.

The province were caught cold from the off, and trailed 28-0 shortly into the second half, but three quick scores had raised the seemingly unlikely prospect of securing at least one bonus point that could prove vital in the chase for a Champions Cup quarter-final spot.

“To a man, we’re pretty disappointed to tell you the truth,” said Kiss.

“In the first 30 minutes we gave them seven or eight opportunities and when you do that do a team like Clermont, especially here, they can hurt you.

“We didn’t control the ball, keep our discipline or keep them out of our half.”

With two rounds of the pool remaining, Kiss admitted that the failure to net even one point could have huge repercussions further down the line.

“It would have been massive,” he said.

“At one point it could have even been two bonus points if we got one more score and then stayed within seven.

“It’s disappointing to get nothing out of it, that’s for sure.”

That Ulster would be chasing any reward in the second-half had seemed unlikely after Clermont’s lightning-quick start.

In Belfast a week ago, Ulster managed 67 seconds before seeing their line breached and it took the two-time runners-up even fewer ticks of the clock this time around.

While Ulster did manage to secure the kick-off with little trouble, Ruan Pienaar’s clearance to touch brought a swift attack from the lineout to set former All Black Isaia Toeava racing through Louis Ludik and around Tommy Bowe.

The chance for an equally swift response was squandered when a maul gained little ground and the ball was knocked on when moved wide.

Ulster were making plenty of handling errors and Clermont displayed their ruthless streak when Charles Piutau gifted them possession with an errant offload.

An isolated Bowe was left with three yellow jerseys for company and French international Remi Lamerat, who had taken the ball from Piutau, made the most of the gratuity, looping a pass wide for Nick Abendanon to score in the corner.

And after Chris Henry was pinged on half-way, the same man was over in the same corner when Camille Lopez measured a beautifully weighted cross kick into his arms.

With Parra adding his third conversion, Kiss’s men were certainly in a hole.

Where a week prior they had slowed Clermont attack through consistent use of the choke tackle, in the Auvergne Franck Azema’s backrow left the province feeding off scraps when in possession.

They weathered the storm better in the second quarter, even after losing prop Kyle McCall to a hamstring injury, but couldn’t take advantage of their first spell of pressure.

With Clermont called for not releasing in the tackle, Ulster rejected the chance to get on the board from the tee and went instead for the corner.

A powerful Stuart McCloskey drive was held up over the line but, with a changed frontrow, the visitor’s scrum was penalised five metres out to bring an end to the half.

The swing in momentum loomed large just a minute after the turn when Clermont wrapped up their try bonus.

From a good attacking position, Ulster were fortunate to corral the lineout but Pienaar’s pass was read all the way by Camille Lopez and the chasing Rory Best was never to catch the out-half.

If that score seemed to ensure the gig was up for Ulster, the reality was anything but.

With their focus on the wane, certainly if Noa Nakaitaci’s run around his own posts was anything to go by, Clermont allowed Ulster back into it with three quick-fire tries.

Bowe was first to cross, going over in the corner after a skip pass from Pienaar.

A mauled try following a high tackle on Sean Reidy soon followed and Ulster were truly back in business when a McCloskey break created the space for Bowe’s second.

The conversion was missed however and, with Clermont jolted awake, the French side would respond with the game’s final ten points to ensure Ulster would see no reward for their improvement.