Gerry Thornley: O’Mahony fuelled by pressure to perform against Saracens 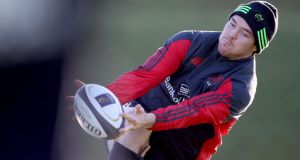 Peter O’Mahony in action during a squad training session at University of Limerick yesterday. “Pressure’s a good thing, especially putting it on yourself. It’s important.” Photograph: Inpho

Next to being the Munster head coach, in a season-defining, make-or-break week such as this, the pressure is perhaps most acute on the Munster captain.

And in his time as Munster captain, save for last season’s quarter-final win at home to Toulouse when suffering the shoulder injury which ruled him out of the semi-final, the stakes have rarely been higher for Peter O’Mahony.

Of course, for such a physically self-less and committed figure, there’d be a part of O’Mahony which would also welcome that.

There is no shame in missing out on the pool stages just once in 15 campaigns, although that does make the memory of defeat all the more hollow

This pressure manifests itself on all the squad, if not in the same way. “I’d say a lot of fellas react differently. I’d say we’d probably be a little bit more difficult to live with,” he says, with a knowing smile. “Crankier is a way to put it, but it’s a good sign I suppose.

Pressure’s a good thing, especially putting it on yourself. It’s important. A fear factor, and all these things, come into play. It’s a cup final game for us. We lose and we’re out. You can compare it to any of the knockouts. It’s international level. It’s win or bust.”

Asked if Munster’s rich pedigree is a factor, O’Mahony said: “It does and it doesn’t. It does for supporters and yourself thinking about it, but for your processes during the week, getting yourself ready to put in a performance on Saturday which is the most important thing, it is a non-factor, it is irrelevant. It is just about getting yourself right, about putting in a performance.”

There is no shame in missing out on the pool stages just once in 15 campaigns, although that does make the memory of the defeat in Toulon on this weekend four seasons ago all the more hollow.

“Yes it is a heartbreaking feeling. To be honest, I haven’t thought about it up to now. I said it already, the fear factor is certainly a factor that will be there for everyone when we take the pitch on Saturday.”

Indeed, it is perhaps both a strength and a weakness of the Irish rugby psyche, particularly within the provinces and perhaps all the more so in Munster, fans and media alike judge themselves or their team on what they do in Europe than in their League; and more so than is the case in England or France.

Accordingly, this means the players do so as well.

I don’t think we’ll be going very far from where we were. It’s cup rugby and we’re not going changing the wheel for this week

“Yes, certainly to a degree,” admits O’Mahony. “Obviously the way the Guinness Pro12 is gone, it is a knock-out competition now for the next few weeks. It is just so important for next season. It is certainly more competitive this season, but we would always judge ourselves off where we finish up in Europe, how far we get. Trophies are essentially where we judge ourselves off.”

Adding to the odds being stacked against them (Munster are six-point underdogs), they have never played on the Allianz Park 4G pitch, where Saracens have won 23 of 26 competitive matches.

“I’ve never played on one to be honest so I can’t really comment. I’ve only trained on one, it’s probably not as good as the one they have. The boys speak very highly of the one in Cardiff. It’s a factor we can’t control.

“We’ve trained on the pitch down below a couple of times but I think it will probably be a little bit quicker, obviously the weather doesn’t affect it so from a forwards point of view not much is going to change.”

Saracens will also have a whiff of revenge from the first meeting, which was their fifth defeat in six matches against Munster dating back to the two one-point losses in the 1999-’00 season, and while O’Mahony didn’t think the Thomond Park tie in October will have much of a bearing on Saturday, he suggested Munster may not vary too much from the tactics they employed that night.

“I don’t think we’ll be going very far from where we were. It’s cup rugby and we’re not going changing the wheel for this week. We have to be better than we were over the last few weeks. There are small things which are still relevant from that night. But we have more focus on their last few games reviewing them.”

Saracens’ revel in their wolf pack defensive mindset, with their backrow of Kelly Brown, Will Fraser and Billy Vunipola influential figures.

“There are obviously hugely important to their go forward and defensively they are very important. We have been involved in games against backrows similar to them. They are an impressive unit, but I think something that is really important for us this week is concentrating on our own performance and getting ourselves right.”