Stuart Lancaster: ‘Sexton was targeted – but not maliciously’ 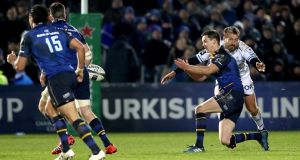 If after eight minutes French centre Mathieu Bastareaud fell foul of Johnny Sexton’s choke tackle in 2015, conceding the turnover in contact, he did leave his mark on the Ireland outhalf in a jarring collision early in the second half.

Sexton suffered a blood injury and underwent a head injury assessment (HIA). When Francois Steyn hit Sexton high at the weekend, the South African outhalf was shown a red card and Sexton again underwent a HIA.

Conor Murray didn’t escape attention and was hit three times, twice by flanker Josh Strauss, in Munster’s game against Glasgow. It wasn’t hard to be lulled towards the suspicion that teams deliberately target key individuals and play on the edge or outside the rules to do it.

But that’s exactly what they do, although as Leinster assistant Stuart Lancaster insists, the targeting is not malicious or intended to hurt opponents. The design is to pressure certain players and sometimes the aggressors take it a step too far. Steyn was at best reckless.

Lancaster freely admits that Leinster targeted Montpellier’s Nemani Nadolo last weekend. The 130kg behemoth, who scored two tries against Leinster in the previous game, had to be stopped.

“There’s that but I’ve never been involved in coaching in a team or against a team that’s deliberately gone out to injure a player and get him off the field. I’ve never come across that in rugby.”

Lancaster speaks from vast experience and while no one believes coaches expressly instruct players to hurt each other, there are those who have sharper pain-inducing instincts than others. There are players who are naturally physical and tend to interpret instructions more liberally than others.

Despite Sexton’s history with head injuries, Lancaster is generous to Steyn.

“I don’t think he [Sexton] was particularly targeted in a malicious way,” says the Leinster coach. “I think Francois Steyn came through and wanted to put a marker down against his opposite number really and got his timing wrong.

“It was dealt with. Johnny passed his HIA and was back in the game and contributed positively to the performance. It’s the nature of the beast as a 10. If you’re going to take the ball flat to the line you’re going to get hit a few times. Unfortunately on this occasion, it was high and he suffered the consequences.”

Sexton finds the focus on his past concussion an irritant, although with the George North affair still causing a stink, the investigation into Murray’s HIA and Dr Cliff Beirne from the Sports Surgery Clinic questioning whether the HIAs are even fit for purpose, there is an understandable interest on all things above the shoulders.

The HIAs are consensus-based, not scientifically arrived at, and Dr Beirne echoes what Dr Barry O’Driscoll has been saying for some time.

Sexton, however, is focused on his game, not his past, and has been impressively in control of his brief at outhalf. He has also been ably helped in that by those around him.

“On the basis of that performance, having reviewed the game, I think he’s in a very good place,” says Lancaster of Sexton.

“Johnny has got a great ability to see the picture and what we’ve tried to do is [have him] see the picture without having to worry about all the other little details, with other people around to help him with that.

“I think the balance of how we spread the work in the backline has been to his benefit so he can play more of a heads-up type of rugby and I think he showed that on Friday night. I thought he was sharp and incisive with his decision-making. He saw the picture early and he executed well.”

For some, it’s just all in a day’s work.