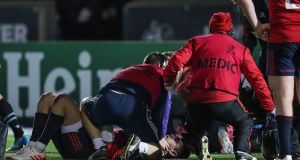 After securing their place in the knockout stages for the first time in three seasons, Munster face an investigation by the European Champions Cup organisers over their handling of the head injury sustained by Conor Murray in Saturday’s 14-12 win away to Glasgow.

The Munster scrumhalf was hit hard in the 60th minute, and in the next play the Glasgow number eight Josh Strauss ran through his attempted tackle. Murray was then taken off for a pitchside head injury assessment in the 65th minute, before being passed fit to return to play six minutes later.

The chairman of the European Professional Club Rugby (EPCR) advisory medical group, Simon Kemp of the Rugby Football Union (RFU), will convene a committee to investigate what is classified as an “untoward incident review” early this week regarding Munster’s concussion management protocols. It is unclear what sanctions, if any, this may result in.

Recently, Northampton were found to have breached rules by allowing George North to play on after a head injury, but were not sanctioned, while Sale are currently being investigated for an incident involving TJ Ioane.

Munster’s win over Glasgow meant they followed Leinster into the knockout stages and, like Leinster away to Castres next Saturday, Rassie Erasmus’s team can also secure a home quarter-final by beating Racing 92 at Thomond Park on the same day.

Connacht can also secure a place in the last eight by winning in Toulouse next Sunday or, for that matter, could do so even if they lose, provided that they secure a bonus point while denying Toulouse. This would leave them second in Pool Two on the fairly safe assumption that Wasps reach 22 points by recording a bonus-point win away to Zebre.

However, a porous Ulster will not be able to complete an Irish four-timer, their 31-19 defeat in an entertaining game away to Exeter on Sunday evening effectively evicting them from the tournament. The game hinged on a yellow card for Paddy Jackson and a penalty by referee Romain Poite for the outhalf’s deliberate intercept in the 71st minute with the score 24-19. Given that Exeter had a three-man overlap, it looked a fair call.

Clermont sealed Pool Five by winning 9-6 in Bordeaux on Sunday, thus joining Leinster, Munster and Saracens in the quarter-finals. The Scarlets ended Saracens’ 13-match winning streak, but a last-ditch try by Chris Ashton earned the holders a fortunate 22-all and, with it, a place in the last eight. That quartet can all ensure home quarter-finals with wins next week, although Saracens are at home to three-time winners Toulon, who kept their hopes alive with two late tries, securing a 27-12 bonus-point win at home to Sale.

“It’s a credit to the players and everybody involved in Munster,” said Erasmus in the aftermath of the win in Glasgow, which ensured qualification for the last eight with a game to spare in his first European Champions Cup campaign. “I don’t want to say that like it sounds like we achieved something already, but as a team one of the targets was to win more games than we did last year. I think Axel will be so proud tonight, you know, that we actually went through and we won the pool. We’ll start on Monday and see how far we can get now.”

Having put themselves in such a good position, however, it would be acutely disappointing if they did not complete the job by earning an advantageous, financially lucrative and badly needed home quarter-final by beating Racing.

“We must work really hard and see if we beat Racing. I promise you I haven’t even looked at the permutations and how it works. We just wanted to win the pool,” said Erasmus. On being informed that a win would ensure a home tie, he said: “Great. That would be great. So we’ll try and beat Racing then.”

At the tournament launch back in early October, Erasmus famously admitted that he looked around to see who were the potential whipping boys in Pool One and realised they might possibly be Munster, so he was asked if his squad had exceeded expectations.

“I didn’t know what to expect, to be honest with you,” he said. “I didn’t know the players well. I didn’t know my assistant coaches well. I didn’t know Ireland, Limerick, well. We moved into a new high-performance centre and that’s why I said at the first meeting that our challenge now is to take what we’ve got, as coaches and players, and maximise the potential. We’ll see where we get. We’ll really maximise that, and if we’d qualify for the quarter-finals, then I would have taken it.”

“It’s really a great group of players with a great work ethic and I had mixed thoughts about the pool because I didn’t know anybody here before I came. It’s satisfying to see that we’ve a quality players-and-management team to get us this far, and now the challenge is to see how far we can go.”

5 Trump endorsement by Jack Nicklaus leads to avalanche of dismay