‘We’re under no illusions as to what waits for us on Saturday,’ admits Munster centre 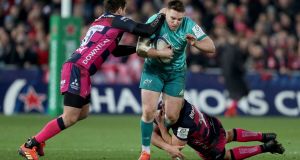 When the fixtures for Pool 2 of the Heineken Champions Cup were first unveiled, it seemed inevitable that all roads would eventually lead to Thomond Park in one of those time-honoured Munster European storylines.

The anticipated plot line had veered off course half way through this most competitive of pools after Exeter’s unexpected defeat at home to Gloucester. That left them on three points, nine adrift of Munster. But successive bonus-point wins, away to Gloucester a week later, and then last Sunday at home to Castres, ensures they come to Limerick four points adrift.

A bonus-point defeat could see Munster squeeze through in a somewhat undignified manner, but to all intents and purposes, this is a winner-takes all quarter-final play-off.

That’s the way both sides will be looking at it. Munster have qualified for the knockout stages 17 times, the most of any team, and have only missed out in three of the last 20 campaigns. A province expects.

“Yeah, definitely,” agreed Rory Scannell. “It nearly feels like the norm, that you have to get out of your group and a lot of the squad that are here at the moment experienced those two years recently when we didn’t get out of the group and they were disappointing times.

“I think we’ve bounced back massively over the last two seasons to get to two semi-finals. So, it’s going to be very important for the club and it’s definitely going to be a tough task against a strong Exeter side who probably didn’t think a couple of weeks ago that they’d be in a position to top the group. But the way the games have gone, it’s pretty tight and it’s just going to be a straight shootout on Saturday.”

Accordingly, Munster have remained very much in Heineken Cup mode this week.

“There’s been a bit more bite in training,” admitted Scannell. “It’s such a competitive squad, and when lads aren’t in the mix, they drive training on. They want to be in that match-day 23 as well and they show that in training. Quality opposition in training is very important going into a big game like this.”

In particular, Jack Nowell’s return for his first game since October 20th after injuring his hamstring with England provided another dimension to Exeter’s attack.

Few wingers look for the ball as much as the elusive Nowell, and playing at fullback his roving threat was even more pronounced against Castres, beginning with his solo try from the base of a ruck within the first three minutes. Rob Baxter could even remove Nowell after 50 minutes with the game won.

“They didn’t give Castres any chance with the way they attacked. There was so much momentum in their attack and they finished some quality tries. Even at times when there were lapses in concentration, and Castres broke them down once or twice, they never really looked like they were going to lose that game.  There were a couple of kicks missed so the margin could have been even bigger. We’re under no illusions as to what waits for us on Saturday.”

Against that, Munster’s own attacking game has been boosted by the return of Chris Farrell, and Joey Carbery’s increasing confidence. Scannell’s strong running and defending, and left-footed game, provided the balance in between against Gloucester. Munster’s most impressive attacking game against frontline opposition this season was also the first time Johann van Graan fielded this 10-12-13 combination.

Of Farrell, Scannell said: “His physicality is massive but he’s also a very good ball-carrier, his skills are phenomenal. When you have a threat like that outside you, he tends to take the defenders away from me, which is great.”

Having played at outhalf for much of his school days, Scannell likes to give Carbery good communication from outside.

“I think he’s playing unbelievable rugby. He had a disappointing day in Castres but since then he is playing some of the best rugby of his career so far and I think he’s really starting to enjoy it. He’s going to be very important to our season.”

Scannell was particularly impressed with the way Carbery responded to an off-day in Castres.

“He’s just been so calm under pressure,” said Scannell. “He’s got all of his last 17 kicks since the Castres game, and that shows great character after having had a disappointing day off the tee in a big European game. There was only a point in it at the end but since then I don’t think he’s put a foot wrong really. He’s had two man of the match awards since, and that shows great character.”