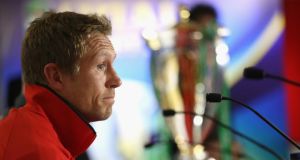 The 19th and last Heineken Cup final makes for a particularly bitter experience from an Irish perspective. When three of the provinces qualified for the knock-out stages, it seemed a fair bet that one might at least make the final with a chance of adding a sixth Irish winner to the cup’s roll of honour from the last nine seasons.

Instead the final will be contested by Toulon, conquerors of both Leinster and Munster, and Saracens, whose defeat of Ulster will haunt Ravenhill for ever more. Yet for all its flaws, real or otherwise, the Heineken Cup winners have tended to be the best side in the competition and today’s finalists feature the two teams who have reached domestic finals after topping their leagues.

Their selections for this heavyweight collision reflect their financial muscle. Toulon name only three French players in an Anglo-Afrikaans flavoured final. Of the 13 Englishmen, three play with Toulon – Delon and Steffon Armitage, whose employment as a breakdown specialist number eight has yielded a remarkable 17 turnovers in the cup to date, and, in the penultimate match of a stellar career, the ultimate model pro Jonny Wilkinson.

Two of Saracens’ 10-strong English contingent are South African born, as are the world’s most dynamic hooker Schalk Brits and lock Alistair Hargreaves, while four of Toulon’s quintet are, like Wilkinson, World Cup winners.

If each could only choose one trophy Toulon, having won the cup last season while losing the last two French Championship finals, would plump for a first Bouclier de Brennus since 1992. Saracens, having won their first ever English crown three seasons ago, might prefer adding a first European title.

The memory of last season’s semi-final defeat at Twickenham gives Saracens a whiff of revenge and last summer they specifically identified and bought prop James Johnston and number eight Billy Vunipola to give them more ballast for occasions such as these.

Admittedly they suffered more of the same when twice beaten by Toulouse in the pool stages, but putting Clermont to the sword at Twickenham was, mentally as much as physically, a benchmark win for Saracens.

That semi-final was striking evidence of how effective their “wolf-pack” defence can be in stopping even as creative a force as Clermont. Saracens won that game 46-6 with a mere 32 per cent of possession, making 165 tackles to Clermont’s 57, and missing 20 for an 89 per cent return, as Jacques Burger, the Namibian captain, led the way with an astonishing 27 tackles out of 27.

Amongst Saracens’ monikers, they are known as “the moonies” such is their cult-like, familial togetherness. Their extraordinary defence must be in part attributable to their willingness to bleed for each other, but in truth they have also added quite a few strings to their bow this season.

That Saracens are playing with much more width can be evidenced by the sight of David Strettle leading the try-scoring charts in this season’s Premiership with 11, while Chris Ashton is joint third on eight. In the Heineken Cup, Ashton has 11 – a record haul in any one season – with Strettle joint third on four. Their 34 tries is way more than any other wing pairing across Europe.

Toulon are entitled to start as the bookies’ three-point favourites, having beaten Saracens by a dozen clear points en route to the title last season. Yet conceivably they won’t have met many, or indeed any, physical force with the defensive commitment Saracens’ wolf pack is liable to produce.

It could also be that, having drawn Zebre and Connacht in the pool stages, and filled their boots with 19 points out of a possible 20 from those four matches, before Ulster were reduced to 14 men inside five minutes with Jared Payne’s red card and then Clermont became so ragged, their name is simply on this trophy’s last staging post for the first time.