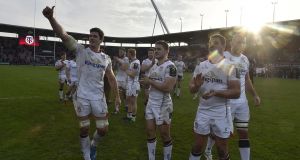 Ulster players salute their fans after victory over Toulouse at the Stade Ernest Wallon during the 2015 Champions Cup pool stages. Photograph: Pascal Pavani/Inpho/Presseye

On foot of a little statistical anomaly there may be a little relief in Ulster that England’s Wayne Barnes will referee Sunday’s Heineken Champions Cup quarter-final against Toulouse at the Stade Ernest Wallon rather than France’s Romain Poite.

Obviously with a French team involved he was never in the frame to do the game. Poite has refereed four of Ulster’s quarter-final matches in the tournament and they have prevailed on just a single occasion, a famous 22-16 victory over Munster at Thomond Park in 2012.

Otherwise it’s been something of a tale of woe, losing to Northampton Saints (2011) in Milton Keynes, Saracens (2013) at Twickenham and last year to Leinster at the Aviva stadium, matches in which Poite had the whistle; albeit it should be noted that he was in charge when Ulster beat Edinburgh at the semi-final stage in Dublin (2012), before losing the final to Leinster at Twickenham.

In six previous quarter-finals, Ulster have managed just one away win, the aforementioned match in Thomond Park but they did beat Toulouse at Ravenhill at the same stage of the competition when going on to lift the trophy in 1999. In fact the Irish province has the joint best – alongside Munster and Saracens – European record against the French club, winning five and drawing one of nine matches between the teams.

Sunday’s match was originally to be played in Le Stadium in the French city, where Toulouse have won five of six quarter-finals, their only defeat in 2006 when Michael Cheika’s Leinster produced an inspired performance to win 41-35. However the game has been switched to Toulouse’s home ground, Stade Ernest Wallon, and Ulster will have very happy memories of their last visit there in December, 2015.

Toulouse have won their last eight European matches at home while their opponents have lost five games in France on the bounce. The injury doubt surrounding Ulster number eight Marcell Coetzee is a concern as alongside McCloskey he has racked up the most dominant carries (20); they sit joint second on the list in terms of the tournament as a whole.

Statistically the French have the best lineout in terms of ‘steals’ with 12 in this season’s Champions Cup, 10 more than their opponents, while they average more offloads (12.7) per match than any other team.

Saturday’s encounter at the Aviva stadium throws up a repeat of last season’s final when Saracens beat Leinster 20-10 in Newcastle with the Irish province prevailing in the 2018 quarter-final in Dublin. Leinster have won eight of their last nine games at this stage of the tournament while the English club have been successful in seven from nine.

Poring through the statistics with a view to the composition of the Leinster team, it’s interesting to note that James Tracy has the best success-rate in the competition of any hooker who has taken 25 or more throws; his return is a whopping 97 per cent (28 from 29).

Tracy is vying for a place in the matchday squad alongside last week’s starter Rónan Kelleher and Seán Cronin. Leinster’s lineout hasn’t been functioning as smoothly since the resumption – there is far more to it than the hooker – so Leo Cullen faces an interesting choice on the composition of his pack.

Leinster’s other standout player across the various categories is flanker and last weekend’s man of the match in the Pro14 final, Josh van der Flier. He has made 98 tackles, more than any other player in the tournament this season and also is joint top with seven turnovers and will be vying for the number seven jersey along with Will Connors, the latter outstanding in the Pro14.

In terms of outright winners, as the graphic illustrates, three of the last four champions emerged from the pool stages as number one seed, an honour that falls to Leinster in the present campaign. That bucked a trend for the majority of the 25 years of the tournament. The number three seeds lead the way in terms of outright wins (36 per cent) followed by number two (32 per cent).

Munster and Leinster (sixth seeds) are the only sides who finished outside a top four ranking at the pool stage to go on and win the tournament. They each lost two pool matches in their respective campaigns, the same number that Saracens have lost en route to the quarter-final.

Davy Fitzgerald’s Sixmilebridge retain Clare hurling title 18:16
Celtic keep up the pace with comfortable win over Hibs 17:40
Dicksboro pour out all their subs but can’t stop Ballyhale tsunami 17:35
Here is your handy guide to sport on television this week 17:01
More VAR handball drama as Newcastle snatch point at Spurs 16:43
Crossword Get access to over 6,000 interactive crosswords