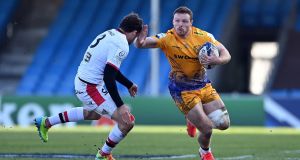 The continuing absence of Sam Simmonds from international rugby remains a mystery to many, albeit with one notable exception, England head coach Eddie Jones. The 26-year-old Exeter Chiefs number eight is the current European player of the year and his performances continue to represent that quality on a consistent basis.

On Saturday he’ll be a key figure – he limped off in the win over Lyon last weekend but coach Rob Baxter said that it was just cramp – as the Chiefs look to find a way past four-time European champions Leinster at Sandy Park (5.30).

England’s travails in the recent Six Nations Championship merely increased the clamour for Simmonds to return to the Test arena, three years after the last of his seven caps, when he started what proved to be Ireland’s Grand Slam-winning game against England at Twickenham. A subsequent knee injury cost him some game time.

Jones remains impervious to any public outcry, something Simmonds confirmed in a recent interview when he said: “He [Eddie] said, at the moment I don’t fit into his squad and how he sees me, and how I play for Exeter, doesn’t fit into his team. And, that is quite tough to take, but at least we get to play for Exeter Chiefs.”

Simmonds is not a power runner but that doesn’t mean he lacks the physical qualities to make an impact on both sides of the ball. At six foot one and 16 stone, he’s not the biggest number eight but he is a brilliant athlete – he was a very good Sevens player – with highly attuned game intelligence.

When Exeter Chiefs won the English Premiership and Champions Cup double last season Simmonds scored 19 tries in 26 matches, a phenomenal strike rate. In this season’s European campaign his standout statistic is his work in defence, where he leads the tournament with six turnovers in just two matches.

Leinster are forewarned, something that Tadhg Furlong acknowledged earlier in the week. “He adds a lot to their team, is a very important player and the way he is currently playing, has such an influence on the game. It would be foolish not to do your analysis on him and try to figure out what’s coming. But saying that you can’t get bogged down on Sam Simmonds, they have a lot of good players.”

Simmonds’s roving commission is facilitated by his team-mates, with all three of the regular frontrow carrying, along with the team’s leading try-scorer in the current campaign, secondrow Jonny Hill (three). It frees up Simmonds, illustrating both Exeter’s power game and the collective work at the breakdown spearheaded by the number eight. The Chiefs squeeze teams into coughing up penalties or turnovers.

It offers a neat segue into the other Simmonds brother, outhalf Joe, who although younger, captains the team. In the two European matches to date, a 42-0 victory over the Glasgow Warriors in the pool stage and a 47-25 win over Lyon in the round of 16, the Chiefs didn’t attempt a single penalty at goal; the kicking option was to the corner. Once Exeter gets a foothold in the opposition 22, they boast the best record in the tournament of translating it into points.

They have an outstanding lineout maul, and this is an area in which Leinster can’t afford any muddled thinking; it’s either contest wholeheartedly – Lyon did this well the last day disrupting five throws – or stay down and aggressively defend the drive. Half-measures will not suffice. The two teams share many qualities when they get within touching distance of the opposition line including looking to take tap-and-go penalties.

In the 35-14 victory away to Montpellier – the Chiefs are a better version of the French side but similar in orientation – Leinster conceded just seven penalties, to 10 in the 35-19 win over the Northampton Saints, for an 8.5 average over the two games. That discipline will need to be as good, if not better, on Saturday.

Even though the Chiefs possess real quality in the threequarter line and in fullback Stuart Hogg, they like to pummel teams into submission first, constrict them with direct, relentless carrying before turning to the likes of Henry Slade to open up the opposition in the wider channels. Joe Simmonds possesses a neat kicking repertoire, recognised in the fact that 29 per cent of the time his team regain possession when he puts boot to ball – the best figure in the English Premiership.

Exeter do offer up opportunities defensively, they can be vulnerable in the set piece and discipline has been an issue. In attack they don’t have a brilliant offloading game or a penchant for razzle-dazzle rugby but once they win the collisions Baxter’s team are patient, precise and remorseless.

Leinster need to win the gainline, be smart, disciplined and accurate at the breakdown to keep Sam Simmonds and his cohorts at bay and have the courage to maintain a high tempo in going after their hosts.