For Exeter coach Rob Baxter, imitation is the sincerest form of flattery 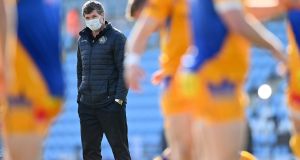 Like Leo Cullen at Leinster, Rob Baxter was a player at Exeter before taking up a coaching role. Photograph: Dan Mullan/Getty Images

Earlier this week the Leinster backs coach Felipe Contepomi freely admitted that Exeter were one of those teams who they always scouted, even going so far as to say they were a joy to watch. The feeling is reciprocal, to some degree at any rate.

“Well, I don’t mind telling you that over an extended period I’ve spent quite a lot of time looking at Leinster, particularly as we’ve tried to develop parts of our game,” admitted the Exeter director of rugby Rob Baxter.

“I’m not the defence coach here anymore, or the forwards coach, but I was for quite a long time. When we first came into the Premiership I did those roles as well.

“Particularly when I was looking at things around our set-piece and initially when we were starting to make some defensive shifts, I spent a fair bit of time looking at Leinster then, which was a few seasons ago.”

While Baxter says his focus shifted towards Premiership foes, once the Chiefs then began competing in Europe, so he scouted Leinster, along with Munster and French sides.

“I think it goes with the territory if I’m honest with you. I think coaching is one of those professions where we all encourage each other to steal each other’s ideas because that happens pretty much on a weekly basis, doesn’t it?

“You see one club doing something and then you see everyone else doing it. It’s just everybody developing that hybrid game to get it to suit you the best is how it works.”

Yet no two teams in this weekend’s quarter-finals of the Heineken Champions Cup seem quite so alike as Saturday’s protagonists at Sandy Park, so much so that Contepomi also joked: “Did we copy them or them us?”

This seems particularly true of the way in which Exeter and Leinster each became the masters at scoring either directly from lineout mauls or relentless, pick-and-jam assaults within five metres of the line.

“But I think a lot of other clubs are adapting to it now,” ventured Baxter.

“It’s a little bit like the tap and go we went to, to start that five-metre process. There’s a lot of teams across Europe and internationally are doing that now.”

Indeed, Leinster were the first to do so in the Pro 14, proving that some of the best new ideas are sometimes merely reworkings of sepia-tinged old ones.

It’s also time-effective and sure enough the tactic quickly spread like wildfire, so much so that when France actually opted for a scrum in their taut endgame with Wales in the Stade de France – with the Welsh content to waste two minutes with resets – Les Bleus looked out of step. Perhaps the French still don’t scout trends abroad as much as they could do.

Four of Exeter’s seven tries against Lyon came from their renowned five-metre game, which also forced two yellow cards, as well as a penalty try from a scrum.

“We’ve been doing it a bit longer,” says Baxter, “and because we’ve been doing it longer we’ve probably seen the things we’ve got wrong more than other teams have, which means you can analyse it and work out what you did wrong and the things that are successful. And they can all add to your plan around your five-metre attack game and everyone’s roles in it.

With perfecting something comes belief too.

“And belief is huge in sport,” says Baxter. “If you believe you’re going to get over the try-line, that makes a big difference as well.”

Baxter also concurs with Contepomi in believing that the presence of five Top 14 teams in the Champions Cup quarter-finals is not necessarily indicative of a trend toward French dominance.

“Wasps were within not giving away one penalty in the opposition 22 from beating Clermont, and that’s Clermont gone and Wasps through. Then it’s four [French] to three English clubs.

“Munster had a pretty much even game until very, very late against a very good Toulouse side, and then what would it become, three English, two Irish and three French? On the basis of two scores cost two games, it would have looked so different in the quarter-finals.”

Maintaining that the heavy defeats by Edinburgh and the Scarlets were “out of the blue”, Baxter added: “I think it’s probably a little more complex than saying the French have just got it right this year. It doesn’t feel like the gap has grown that big that quickly.”

Exeter and Leinster have one other striking thing in common, directors of rugby who were previously long-serving captains as well. In other words, save for Leo Cullen’s two-year sojourn to Leicester, ‘one-club men’ as players and then coaches.

Baxter believes that as a result of being embedded at one club “you start to take on some of that emotional kind of leadership about what drives players and what creates good performances from people. It’s not always just the knowledge of rugby, it’s also a knowledge of people.

“I think that’s a very important part of building a culture around a club that can have some ongoing success and some ongoing enjoyment on the pitch, because ultimately, success and enjoyment, however you want to look at it, they do go hand in hand. They genuinely do.”