The draw for the group stage on the 2016/17 European Champions Cup has been completed with Munster facing Racing 92, while Ulster have to take on ASM Clermont Auvergne. Video: EPC Rugby 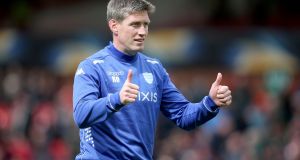 The collection of positive Irish soundbites which followed the Champions Cup draw for 2016/17 might be enough for now but growing concerns about the strength in depth of provincial squads will only be alleviated by foreign signings.

In stark contrast, the French and English clubs have been far from idle.

Considering the season just past, when all three Irish provinces failed to reach the knockout stages, bookmaker odds already place Leinster, Ulster and Connacht as third favourites in their respective pools.

Munster are an outside bet at 8/1 to top a pool also containing Top 14 champions Racing 92 (and Ronan O’Gara), Leicester and Glasgow.

Neither Erasmus nor head coach Anthony Foley made any comment yesterday, with team manager Niall O’Donovan saying: “As always our European journey is hugely exciting for the squad and our supporters and although we haven’t achieved what we wanted in the last two seasons our supporters have always stood by us, whether it’s France, Italy, England or Thomond Park they turn out in huge numbers and get behind the team.”

That remark, with attendances in Limerick and on the road so obviously plummeting these past two seasons, can no longer be accepted as fact.

The base expectation for Leo Cullen’s Leinster is to reach the quarter-finals, with Montpellier and Castres in their pool and possible back-to-back ties against Northampton in December. Every season Leinster rely on two fixtures at the Aviva Stadium – Munster and round four of the Champions Cup in late December – to turn any sort of profit. A home European quarter-final guarantees a year in the black.

Two years ago they were superb in victory over Northampton at Franklin’s Gardens only to miss out on a home quarter-final after losing to the same opponents a week later.

The Saints have signed Louis Picamoles, but Montpellier, under Jake White, look an even more daunting prospect as both du Plessis brothers, Bismarck and Jannie, are joined by arguably the game’s greatest winger, Fijian giant Nemani Nadolo.

Leinster acquired Robbie Henshaw, Jamison Gibson-Park and Ian Nagle but the unexpected retirements of Eoin Reddan and Luke Fitzgerald could prove hugely significant. It has also been established that Cullen did not want to lose Ian Madigan, Ben Te’o, Marty Moore or Cian Kelleher to Connacht.

The Pro12 champions got a draw their top seeding merited, with Connacht grouped alongside Wasps, Toulouse and Zebre. They famously won in Toulouse back in December 2013 (only to tumble 37-9 a week later at the Sportsground), but they have a decent chance of qualifying if South African outhalf Marnitz Boshoff proves a successful replacement for AJ MacGinty.

Ulster appear to have the worst draw in pool five with two French clubs, Clermont and Madigan’s Bordeaux-Bégles, along with the impressive Exeter Chiefs (where Ian Whitten and Gareth Steenson get to show their home province what they are missing).

Kiss refused to shy away from a “fairly tough” pool. But unlike last season, when he only arrived post-World Cup, the Australian gets a full run at a club campaign for the first time in his coaching career. And in All Black fullback Charles Piutau, he can deliver on his promise of running rugby. Also, they will become a better side when Springbok flanker Marcell Coetzee regains fitness, while Irish-qualified lock Kieran Treadwell has potential.

“We just got to embrace the challenge, believe in what we are doing, and deliver,” he said.