Munster can learn from Leinster blueprint against Chiefs 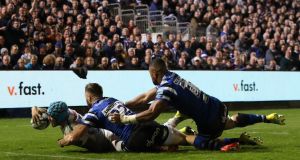 Leinster’s Heineken Champions Cup victory over the Exeter Chiefs at Sandy Park last season will have provided source material in analysis terms for the home side, and Munster, who meet at the same venue on Saturday afternoon.

That defeat led to Exeter coach Rob Baxter admitting mental preparation can be as important as its physical sibling.

“Last season we played Leinster having beaten Bath at home more convincingly than we did last Friday and maybe we felt overconfident with how we were playing and that caught up with us a bit. That is why we have been happy to leave the Bath performance behind and just focus on Munster.”

The Chiefs sit proudly atop the Gallagher English Premiership with six victories – 29 points from a possible 30 – as five of those wins were embellished with four-try bonus points. Only the Newcastle Falcons denied them a clean sweep, allowing the Exeter club to cross their line on just three occasions.

During that run of success the Chiefs have scored 29 tries, including six per game in wins over the Leicester Tigers and Wasps away. They have accomplished this with a reasonably settled side but there have been a number of injury considerations.

Having won the Premiership title in 2016-17 and been been beaten in last season’s final by Saracens – the Chiefs topped the league proper stage of the tournament – the club’s recruitment during the summer in terms of big game players was limited to Lions and Wales international wing Alex Cuthbert. He has only played in two of the six matches to date.

The essence of the Chiefs’ team is instantly recognisable. Phil Dollman at fullback, the brilliant Argentine Santiago Cordero on one wing, Jack Nowell or Cuthbert on the other with Baxter mixing and matching between Ulsterman Ian Whitten, Ollie Devoto and Henry Slade in the centre.

Another Irishman, the evergreen Gareth Steenson has played four of the six matches this season at outhalf despite the presence of the highly regarded Joe Simmonds, a brother of Sam, who was seen as the heir apparent to the 10 shirt. The Chiefs have two complete front rows largely of international calibre with little diminution in quality. Hooker Luke Cowan-Dickie is a veritable force of nature.

The absence of Hill and Sam Simmonds is definitely a loss – Thomas Waldrom finished up at the end of last season – but the back five in the pack still possesses so much power and athleticism. Zimbabwean-born England international Don Armand is the focal point of their lineout while Matt Kevesic is a scourge at the breakdown.

Throw in a couple of Australians in Dave Dennis and Ollie Atkins along with Sam Skinner in the second row and there’s plenty of grunt. The Chiefs’ rolling maul is hugely destructive and Munster will have to be wary of conceding lineouts in their 22. Their scrum though can be got at as Leinster demonstrated last season.

Exeter’s corrosive carrying and power up-rate boasts the perfect foil in the footballing ability and pace of their three quarter line.

Despite their consistent excellence Exeter are vulnerable, as previous campaigns in Europe have demonstrated. Leinster offered Munster a little bit of a blueprint in the way in which they beat the Chiefs at Sandy Park. They starved the home side of possession, occasionally going through 30 or 40 phases, grinding and probing away but remaining patient and for the most part not kicking away possession unless to contest it aerially. It yielded two tries and a victory.

However, on the flip side, there was perhaps a warning in the return fixture last season in that Exeter led 17-9 at half-time in the Aviva stadium and it was only through a late try from Luke McGrath that allowed Leinster claim a win. The lessons from that occasion were that, given ball, the Chiefs have the firepower to scalp the best.

The two sides met in a pre-season friendly which the English club won 12-0 on the road; 10 of their likely starting team began that match while Munster had less than half that number in terms of those that will run on in Sandy Park on Saturday afternoon.

Munster showed in the Aviva Stadium last weekend they can dominate territory and possession against a top side and that, along with a tweak in their attacking patterns, is exactly what’s required against the Chiefs.