The Champions Cup round one: 10 things you really should know 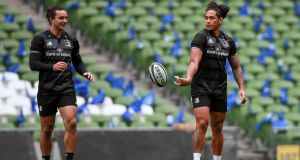 James Lowe starts for Leinster against Wasps, with Joe Tomane on the bench. Photograph: Tommy Dickson/Inpho

The first weekend of Champions Cup action rolls around five months after Leinster triumphed in Bilbao. The defending champions are the first Irish province in action as they take on Wasps in Pool 1 at 7.45pm on Friday in the RDS. In the same pool Bath take on Toulouse at 1pm on Saturday.

Munster then get their campaign underway at 3.15pm on Saturday with an away trip to Exeter Chiefs while Gloucester and Castres Olympique complete the Pool 2 line-up on Sunday at 1pm.

Ulster round off the Irish provincial action on Saturday evening when they meet Leicester Tigers in Pool 4 at 5.30pm with Scarlets and Racing 92 clashing at the same time.

The full weekend’s fixtures are as follows:

This year the competition has been rebranded - with Heineken returning to transform the Champions Cup into the Heineken Champions Cup. In fairness, for many people it remained the Heineken Cup even after the tournament last carried its name in 2013-14. But now, to save any confusion, the Dutch lager connoisseurs have returned as title sponsor to continue their long association with Europe’s flagship competition.

You can follow all three of the Irish provinces’ matches on The Irish Times liveblog with each starting 30 minutes before kick off. Alternatively you can watch all three provincial games on BT Sport.

A breath of fresh air. While every Champions Cup fixture will be broadcast on BT Sport one match every weekend will also be shown on terrestrial television via TV3/Virgin Media One and Channel 4. First up, it’s Bath v Toulouse at The Rec (1.0pm), with Leinster bound to be interested observers as the other two sides in Pool 1 start their campaigns.

Cullen has named a formidable looking XV for the RDS - with the pack made up entirely of Ireland internationals.

Munster and Ulster are both set to name their sides on Friday, and both Johann van Graan and Dan McFarland have plenty of injury concerns.

Van Graan’s headache comes at number nine with Conor Murray still sidelined and the likely absence of Alby Mathewson. It means Duncan Williams is set to start alongside Joey Carbery in the halfbacks.

Ulster remain plagued by a lengthy injury list, however McFarland is hopeful of welcoming back a trio of summer recruits in Jordi Murphy, Marty Moore and Will Addison. One player who won’t feature in Belfast is flanker Matthew Rea, who was handed a four-week ban following his red card in the Pro14 defeat to Connacht.

It’s been an impressive start to the Pro14 for Leinster with five wins so far out of six matches and another boost gained from last weekend’s win over Munster despite making 11 changes. Leo Cullen’s selection headache is certainly a welcome one but the pool of talent the province have is still hard to fathom. After the win last Saturday, Cullen said: “There will be guys disappointed that they’re not going to be involved next week and that is the way we want it. So, there are some difficult conversations we need to manage and hopefully that drives the group forward because we have so many big games coming up.”

It’s rare that all of the Irish provinces will play English teams on the same weekend in the Champions Cup but that’s the case with three mouth-watering ties in store. Since five of the eight semi-finalists three seasons ago were English teams with no Irish in sight, there has been a shift in patterns. Last season just one English team - Saracens - qualified for the quarter-finals and they were knocked out by Leinster. In his Tuesday column, Gerry Thornley looked back at the storied history of Anglo-Irish battles on the European stage.

A special bond can be created at Munster

“Don’t f**k up.” Those were the words uttered by Mike Ruddock to Gordon D’Arcy before Leinster played Ulster in 1999 and, as D’Arcy writes himself, it ruined him as a 19-year-old kid. In his column on Wednesday the former Leinster man wrote about the effect that coaches can have on players’ mentality and how their words must be carefully considered. “This is crucial in the Van Graan/Carbery relationship [AT MUNSTER]because Joey seems capable of handling a serious amount of information, so the hard part this week is deciding what is relevant,” he writes.

An injury to Jamison Gibson-Park means Leo Cullen can name Scott Fardy and James Lowe as his two international players for Friday night’s opener. And Wasps should beware the in-form Lowe, who delivered a monster performance in last weekend’s 30-22 Pro14 win over Munster. The New Zealand winger scored a brace of tries at the Aviva, but his contribution extends to more than just try scoring prowess - somethingJohn O’Sullivan discusses in Thursday’s rugby statistics column. “He averages 72 metres per game with a high of 102 metres against Connacht, the only contest so far in which he didn’t dot down, and carries the ball on average 11.75 times per match.”

While Lowe and Fardy have been named as Leinster’s two non-European players, there is also a place on the bench for Joe Tomane. That’s New Zealand-born, Wallaby-capped Tomane. The 28-year-old holds a Samoan passport, providing him and Leinster with a convenient sidestep around the Champions Cup rule which states that tates that teams can only have a maximum of two ‘non-Europeans’ in their squad. A number of nations - including South Africa and the Pacific Island countries - are exempt from this rule under the Cotonou Agreement between the EU and African, Caribbean and Pacific group of States.