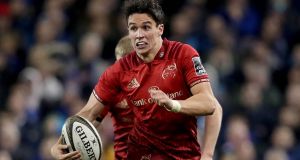 Speaking about Joey Carbery, Ronan O’Gara said: “People forget that Joey Carbery is 22 years of age. It’s staggering to see his growth as a player. I just hope people aren’t expecting too much of him in his first full season playing ‘10’.” Photograph: Billy Stickland/Inpho

Heineken are back as title sponsors and arguably no team is more synonymous with the competition, nor provided more of its greatest memories, than Munster. The Heineken Cup and Munster are inextricably linked.

Ever the Drama Kings, even when apparently sinking without trace, no one has demonstrated a better ability to navigate through the choppy waters of the pool stages. They’ve done it 17 times. Hence, no team has played more matches in the tournament’s history, but as they approach their 167th match at the outset of their 24th campaign, they appear both more ambitious and more vulnerable than before.

Today, despite successive semi-finals, they seem to be almost at the start of a new journey, and against an Exeter team who are way more advanced in theirs. It is Johann van Graan’s first full season. It is Rob Baxter’s 10th.

Furthermore, after just one quarter-final in five campaigns, the Chiefs view Munster as a prized opening scalp. This is a curious case of form v pedigree. Exeter have oodles of the former and little of the latter, whereas Munster are the opposite.

In their pomp, no one epitomised Munster more than Ronan O’Gara. With 1,365 points he is the tournament’s leading points scorer of all time, and by a distance. Stephen Jones, in second place, is 496 points behind O’Gara, who recently became only the 12th Irish player to be inducted into World Rugby’s Hall of Fame.

Looking ahead to Sandy Park today, he admits: “I feel it would be the result of the weekend if Munster were to win over there. I think it would be absolutely huge.

“Exeter are highly organised. I don’t think there’s any area on the pitch that they don’t have a plan for. They’re so patient in how they play the game, and they’re a clinical side.

“They’re a coming team and they had Leinster on the ropes last season but Leinster’s class told. Leinster have better individuals, but Exeter put them under the pump for a long while. Other teams might have broken but Leinster had the mental fortitude to stay strong.”

In another nostalgic twist, the competition returns to free-to-air TV this weekend, and O’Gara will be back on our screens as a pundit for Virgin Media One’s coverage of the Bath-Toulouse game today (kick-off 1pm), as well as a highlights package at 9.50pm. Next week he will be in his old stomping ground of Thomond Park to offer his analysis of Munster v Gloucester, re-invoking memories of the Miracle Match and more besides.

He’s been back twice on European days, for Munster’s quarter-final demolition of Toulouse five years ago and the emotionally charged win over Glasgow three seasons ago in the week of Anthony Foley’s funeral. But this is his first punditry gig there.

So he’ll park his Munster loyalty, to a point.

“People would probably respect that too, because Munster is my home team. I’ve coached for different clubs but I only ever played for Munster and that’s something I’m very proud of.”

But no less than anyone else, O’Gara feels there has been little Munster form to work off until last Saturday’s meeting with Leinster. While he notes that Johnny Sexton wasn’t playing, neither was Conor Murray, and O’Gara reckons he’s even more integral to Munster “because so much of their game revolves around ‘9’”.

Yet there has been clear evidence in a shift of emphasis in Munster’s attacking game, from their “9” to their “10”. Starter plays and phase plays revolve around a runner like Dan Goggin, or a pod of two or three players, to either truck the ball up or pull the ball back for Carbery to bring outside backs into play.

“People forget that Joey Carbery is 22 years of age. It’s staggering to see his growth as a player. I just hope people aren’t expecting too much of him in his first full season playing ‘10’,” says O’Gara.

Nonetheless, he has no qualms about again comparing Carbery’s gliding acceleration and broken field running to Beauden Barrett. Hence O’Gara believes we might see more of Carbery as an impact replacement for Ireland, “whether it’s ‘10’, ‘15’ or ‘12’, because when defences get a little bit tired, the guy can play ball better than most players”.

Whether due to Murray’s absence, or Carbery’s arrival, Munster are also playing more through “10”, going wide more quickly and more often, although O’Gara thinks it would have happened regardless.

“Where they were coming from they were trying to get their basics right, with a massive emphasis on kick-chase. I think even the players got bored with that. I’d say someone like Earlsy, over the summer, would have said ‘I need to get more ball in my hands’. He’s been playing so well and his voice would be listened to down there. So it was probably something that was going to develop anyway.”  Carbery’s recent run of four successive starts at outhalf already amounts to more games with the number “10” on his back in the whole of last season (two for Ireland and one for Leinster). Furthermore, none have been with Murray.

“It’ll be a lot easier for him when Conor is there, because at the moment, he’s the senior halfback partner and that’s not fair at a new club and at 22 years of age. It’s a pretty big ask even though he takes everything in his stride.”

O’Gara also thinks Chris Farrell’s absence is a blow. “I watched a lot of him in France and analysed him a lot. He’s a very good player. He’s capable of a passing game, excellent footwork, capable of carrying ball, smart. People forget he was man of the match in a Grand Slam season against Wales. If he got a run of games he could be a huge addition to Munster.”

O’Gara also hails the selfless decision-making of Rory Scannell and “a dangerous back three”. That said, in last May’s Pro14 semi-final at the RDS, Munster also had more passes, metres, possession and territory, but while these figures all increased further last Saturday at the Aviva (169 passes to Leinster’s 78, 366 metres made to 181), their line breaks were down from 10 last May to seven.

Perhaps tellingly, three of those line breaks at the RDS were by Simon Zebo. Munster are, inevitably, just a little less penetrative without him.

“Without a shadow of doubt,” agrees O’Gara. “I am adamant that any strong squad, whether it’s the Lions, Ireland or Munster, are better for having Zebo in it. He does what brilliant strikers have done in football over the years consistently: he scores tries. His try-scoring record is incomparable to anyone else in Irish rugby.”

That said, O’Gara believes Racing 92 are missing “their key leader up front in Yannick Nyanga and key leader in their backs in Dan Carter”.

Looking across the 20 contenders, O’Gara says: “I think Leinster have something that other teams don’t have. They’ve got great experience, massive hunger to go again and also I wouldn’t underestimate the value of having such energy in their young legs.

“They have Furlong, Porter, James Ryan, van der Flier, Leavy – with these guys there’s no mileage on the clock. And you get up off the ground sub-consciously a little quicker than you do when you hit 27/28. These fellas are whippets. They don’t feel the bangs or knocks, because it’s not cumulative. They think this is the norm, but after five or six years in the game they go ‘oh, this is a bit different’.”

O’Gara also watched Saracens’ win against Harlequins last weekend and concludes: “I thought they were a few rungs below Leinster and I think that was demonstrated in last season’s semi-final against Leinster. I think when Leinster wanted to go up a gear they left them for dead. That’s not to say that, like the All Blacks, on a given day they can’t be caught.”

1 The game they loved so well: How cricket united Hume, McGuinness and McCann
2 Rory McIlroy steadies the ship after shaky start at US PGA
3 Andy Farrell admits Ireland net may need to be spread wide in the autumn
4 Geordan Murphy navigating Leicester Tigers through the Covid-19 storm
5 Stakes high for Guardiola and City as Real Madrid come to town
Real news has value SUBSCRIBE

Róisín Upton: Ireland women adding flair to their steel with Tokyo calling 06:00
Stakes high for Guardiola and City as Real Madrid come to town 06:00
Geordan Murphy navigating Leicester Tigers through the Covid-19 storm 06:00
Andy Farrell admits Ireland net may need to be spread wide in the autumn 06:00
Brain as well as brawn on Sexton’s lockdown menu 06:00
Crossword Get access to over 6,000 interactive crosswords