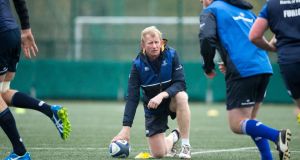 Leinster coach Leo Cullen: “There are areas we can fix that are very much in our control.” Photograph: Morgan Treacy/Inpho

The mental torment of last Sunday’s 33-6 defeat to Wasps has been exacerbated by a physical tariff ahead of tomorrow’s Champions Cup pool match against Bath at the Recreation Ground.

Seán O’Brien, Mike McCarthy and Richardt Strauss, all of whom suffered head injuries in last Sunday’s defeat to Wasps, are following the return to play protocols associated with concussion but with a six-day turnaround between matches Leinster coach Leo Cullen admitted that it was “unlikely” they would feature on Saturday.

He explained: “The guys with the head knocks, it’s looking a bit tight for those guys so it is unlikely that the three of those guys would feature. It’s tight timelines and even though the three of them are okay, I think we will always err on the side of caution.”

To compound matters Jack Conan broke a bone in a foot at training on Tuesday, necessitating a surgical procedure that will sideline him for eight to 10 weeks. The 22-year-old UCD student Josh van der Flier, a genuine openside flanker who has progressed through the ranks impressively, could be a principal beneficiary of the backrow issues. Dominic Ryan is another with compelling credentials.

Cullen admitted: “Rob, Luke and Ben are getting very close, Isa too. A few of them trained today which is encouraging. I’ll get the report on how they fared from the medical team but they have come through pretty well; so the majority of them are in consideration.”

He conceded that the review of the Wasps’ defeat had unearthed a number of things not immediately evident after the match and that the challenge going forward for him and the rest of the coaching staff was the importance of a balance in emphasis between looking back and moving forward.

“It is trying to strike the right chord all the time because we have to get a certain level of detail against a team that we know is going to be a tough challenge and the guys needed to see some harsh realities to the (Wasps) game, where we let ourselves down. There are areas we can fix that are very much in our control and that would disappoint me and anger me from last weekend.”

A lack of experience in the role of head coach is a stick that’s occasionally waived in his direction. He is neither cowed by the accelerated learning process required in an unforgiving, competitive environment, nor by having to unravel the exceptional circumstances germane to a World Cup year.

“In terms of European experience, not many people have more. That’s a fact. The coaching part of it, yeah there are certain things. But, there’s not a huge amount I can do about that.

“I will endeavour to do the very best that I can for this club because it means a huge amount for me. I would be a firm believer in the ability that we have in this building as well. We had a bad day at the office.

“It’s important that we address certain things that did not go well and it’s important that we move on to the next challenge because we’re in a very tough block of games. We don’t have the opportunity, like we normally would in pre-season, to try out new ideas. We’re into competitive games.”

They certainly are too as Leinster face into a run of games following Saturday’s assignment against Bath that will see them play Ulster, Glasgow Warriors, Toulon (twice), Munster, Connacht, the Ospreys and then return fixtures against Bath and Wasps.

Sitting alongside Cullen, was Devin Toner, who offered a player’s perspective. “You have to dust yourself off. We know we let ourselves down as players, let the coaches down.”

Management, players and supporters will all demand a positive reaction to last Sunday’s events but there’s more required; a victory. Anything less is likely to render Leinster’s interests beyond the pool stage as academic.

The team to play Bath will be announced at lunch-time today.