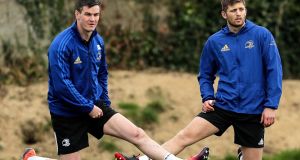 Leinster’s Johnny Sexton and Ross Byrne in training ahead of the Champions Cup quarter-final meeting with Ulster. Photo: Laszlo Geczo/Inpho

Unless you’re French, Scottish or a Munster fan – or perhaps all three – there’s only one show in town this weekend.

The Heineken Cup quarter-finals have been kind to us, and on Saturday evening we have an extra interprovincial derby to enjoy as Leinster take on Ulster at the Aviva Stadium.

The four-time and defending champions, Leinster remain the team to beat in this year’s competition, despite their air of invincibility – and that of Irish rugby in general – shattering ever so slightly this season.

Leo Cullen still has a wealth of talent at his disposal with a squad full of genuinely world class players, and his side will carry heavy favouritism into Saturday’s game.

Ulster, meanwhile, head to Dublin with relatively little to lose. Dan McFarland’s side have enjoyed a relatively solid season thus far, but perhaps exceeded expectations in qualifying for the Heineken Cup knockouts.

A win for Ulster at the Aviva on Saturday seems improbable, but if they pull it off it would go down as one of the greatest results in the province’s history.

For Leinster, defeat is not an option. For Ulster, a victory would mean everything. A famous clash between the two provinces lies in store – here is everything you need to know before they meet in Dublin.

The third Heineken Champions Cup quarter-final between Leinster and Ulster.

The match kicks-off at 5.45pm on Saturday March 31st, at the Aviva Stadium in Dublin.

The headline fixture of the last-eight – from an Irish perspective at least – remains firmly behind a paywall, and will be shown live on BT Sport.

You can, however, follow the whole thing via the Irish Times liveblog, which will be live from around 5.0pm.

The Aviva Stadium is well and truly sold out for Saturday’s game.

Leinster began the defence of their title with a bang, as they eviscerated Wasps as the RDS, running out 52-3 winners. If that was a warning for the rest of the continent, it wasn’t heeded by Toulouse, who then shocked the province with a 28-27 win at the Stade Ernest-Wallon. If there was any doubts Leinster’s crown was slipping they were soon dismissed with four successive victories - although they could be left to rue their failure to secure a top-two seeding and with it a potential home semi-final.

Ulster’s progression into the knockouts can be pinned on one result in particular – their mammoth 26-22 victory over Racing 92 in round five. McFarland’s side did their job elsewhere – recording doubles over the disappointing Scarlets and Leicester Tigers – but it was the famous win over one of the competition favourites which cemented their quarter-final berth, and showed the rest of Europe they are a match for anyone on their day. Leinster will be wary.

Johnny Sexton has been ruled out with injury for Leinster while Devin Toner, Robbie Henshaw and Josh van der Flier remain long-term absentees. Dan Leavy and Luke McGrath both returned to action last week and both could start on Saturday, with McGrath’s fitness allowing Cullen to pick Scott Fardy.

Will Addison and Louis Ludik will definitely miss the clash with Leinster, while Marty Moore and Darren Cave make it in despite doubts over their fitness. Iain Henderson has recovered from a knee injury sustained in Ireland’s Six Nations win over France to play, giving the province a major boost.

Jordan Larmour on the dealing with Ireland teammate Jacob Stockdale: “He’s world-class and some of the tries he scores are a bit of a joke. So you give him the ball in a bit of space. He will chip it over you, go around you or go through you. He’s a big man. He can score a try from anywhere, so we have to be ready for that. We are going to have to have all hands on deck when he gets the ball.”

Rory Best on what’s in store for Sexton: “We’ll not be going out to target Johnny. I’ll not be having to have that conversation with the ref about protecting Johnny because, ultimately, we’ll obviously put pressure on him but we’ll try to put pressure on all the Leinster team – because if you go after one player in a team like that there will be 14 other players that are capable of picking you off.”

These two sides last met in the Heineken Cup in the 2011-12 final, which drew a crowd of 81,774 to Twickenham. And it was Leinster who were triumphant, running out emphatic 42-14 winners.

Of the two sides in the squad that day, Leinster have four survivors likely to feature on Saturday – Sexton, Rob Kearney, Cian Healy and Sean Cronin. Ulster meanwhile have one in the form of Best.

Cullen captained Leinster that day, while Joe Schmidt was their coach.

What about to win the tournament?

Leinster are the bookies favourites, with Ulster the tournament’s rank outsiders:

Saturday is set to be dry, cloudy and around 12 degrees - perfect rugby weather.

France’s Romain Poite is in charge on Saturday.

The road to Newcastle

Saturday’s winners will face the winners of Racing 92 v Toulouse in the semi-finals. Should Leinster win they would play away against Racing or at home against Toulouse – Ulster would face a trip to France regardless. Not that they would mind.

May the best province win!

I’m only bothered about the Munster match. . .

Lewis Hamilton the fastest in Austria Grand Prix practice 12:27
Ole Gunnar Solskjaer: ‘The sky’s the limit’ for Mason Greenwood 12:07
Monica Seles: The warrior queen who could have been the best ever 11:25
Thrillingly fluent, thrillingly pointless: Man City’s riposte comes too late 08:54
World Athletics freezes out Russian athletes after $5m fine goes unpaid 08:41
Crossword Get access to over 6,000 interactive crosswords