Leinster’s know-how can see them home against Bath 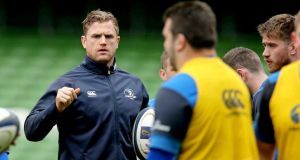 It’s hard not to over-play the importance of this fixture. Leinster’s season looks to be distilled into 80 minutes.

Dip into their undoubted European pedigree to earn a semi-final a fortnight hence – most probably away to reigning champions Toulon – and it will be their best European Cup campaign since winning the trophy for a third time three seasons ago.

Lose and the remainder of the season will have a decidedly anti-climatic feel.

Each come into this quarter-final with their momentum interrupted by the Six Nations, but back to full strength and locked and fully loaded for a potentially epic Anglo-Irish collision which has leftovers from the Ireland-England game at the same venue five weeks ago.

Jamie Heaslip returns to lead Leinster in his 198th appearance for the province as one of nine changes from the side which drew 34-all at home to Glasgow.

Luke Fitzgerald starts on the left wing, while not surprisingly Isaac Boss starts after his two-try display off the bench last week for a slightly beaten up Eoin Reddan, who nonetheless can provide real impact as usual off what looks like a very strong bench.

There are six changes up front, with a new frontrow of Cian Healy, Sean Cronin and Mike Ross; Devin Toner comes into the secondrow alongside Mike McCarthy; and Seán O’Brien also returns to the backrow for what will only be his second game of the season for Leinster.

Similarly, Dave Atwood, George Ford, Jonathan Joseph and Anthony Watson (who starts at fullback) all return to a Bath side that could afford to rest them for last Sunday’s bonus-point win at relegated London Welsh. In one of the many intriguing sub-plots, each of that quartet will feel they have a point to prove after relatively undistinguished games against Ireland.

In Ford, they have an outhalf who is more comfortable in running the ball than the vast majority of his peers; he times his use of the pods outside him very well before releasing the dynamic threat of Joseph, Watson, Horacio Agulla and Matt Banahan.

Their ability to beat players one on one is particularly pertinent given how Leinster slipped off one-on-one tackles in the first-half against Glasgow last week. A repeat of that first half and Leinster will assuredly exit the competition, but in that sense one presumes it will have been a salient reminder. Coupled with a reviewing of Bath’s stunning win in Toulouse – easily the performance of the competition to date – that ought to ensure they are well prepared defensively and play with intensity.

In reaching their first European Cup quarter-final for six seasons, and with their priority probably being a home quarter-final in the Premiership, in many respects this is something of a free hit for Bath. That makes a dangerous side potentially more dangerous.

For sure, as ever, the performance of the referee Jérôme Garcès, especially at scrum time, could have a significant bearing. The penalty count was 13-12 to Leinster when they lost to Harlequins at the Stoop in December, but of the five scrum penalties, four were against Leinster.

However, if their scrum holds up well – and Bath are a tad de-powered by injuries at tighthead – then with Toner and Heaslip back, their lineout should function well. It may not be a backline of all talents, and the midfield is still a work in progress, but their outside three are all in form and each provides a potential X factor in their own way.

There is still bundles of talent in this Leinster squad. Home advantage, along with that big-game, knock-out experience, means Leinster are perhaps more likely to make less mistakes and execute correctly at key moments.

It may not always be pretty. This is high pressure cup rugby. The result is everything. Leinster may just want it more and may have a bit more savvy.