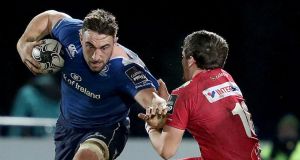 Jack Conan is fit to start at number eight for Leinster in Saturday’s Champions Cup quarter-final against Wasps at the Aviva Stadium.

Conan missed last weekend’s 22-21 win over Cardiff with a tight calf so Rhys Ruddock filled in for Jamie Heaslip – who recently underwent surgery on his lower back following an “ankle” problem that morphed into a “hamstring” injury over the course of the day Ireland beat England.

Ruddock, despite picking up the man-of-the-match award and playing all 80 minutes, is struggling for fitness once again but may still provide backrow/lock cover.

This all but sorts out the backrow conundrum with Josh van der Flier favourite to start at openside, so Seán O’Brien on the blindside would see the in-form Dan Leavy benched.

The alternative would be Leavy at six and Van der Flier used as an impact substitute in the second half.

Due to the absence of Rob Kearney (knee), Joey Carbery is likely to be retained at fullback, which puts pressure on Ross Byrne to remain in the 23, while Adam Byrne’s nine try haul so far this season should keep Zane Kirchner, Rory O’Loughlin and Fergus McFadden at bay.

That would mean Isa Nacewa captains the side from the left wing as the Ireland midfield of Johnny Sexton, Robbie Henshaw and Garry Ringrose reform in blue. Devin Toner, Jack McGrath, Cian Healy and Tadhg Furlong are also set to return following a rest week post Six Nations.

Seán Cronin retains a chance of returning at hooker.

Wasps coach Dai Young, unhindered by the IRFU’s selection policy, brought England flanker James Haskell straight into his starting XV for the 40-33 victory over Worcester last Sunday. Joe Launchbury and Elliot Daly, who also started Ireland’s 13-9 victory in Dublin on March 18th, are other essential returnees if the current Premiership leaders are to prevail.

There are three former Leinster players in the Wasps squad. Marty Moore should start at tighthead with Jimmy Gopperth kicking the goals from inside centre, but Brendan Macken could be squeezed out of the match-day 23 by Daly’s return.

Paul Mannion pounces for key goal as Dublin see off unlucky Donegal 22:07
Laois stay safe with King to the fore 21:01
Dan Martin climbs to second in Portugal 20:39
Jesus spares Aguero’s blushes at Leicester 19:43
Jack O’Connor snatches the points for Wexford 19:42
Here is your handy guide to sport on television this week