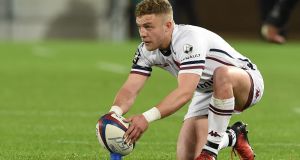 Ian Madigan spent last week preparing for the visit of Toulouse to the Stade Chaban Delmas in Bordeaux, so he’s perfectly placed to offer an appraisal of what Munster will face in their Champions Cup quarter-final against the four-time European kingpins at Thomond Park on Saturday.

The 28-year-old former Leinster outhalf played three-quarters of the match as Bordeaux-Begles beat Toulouse 20-11 at the weekend, kicking two penalties. The visitors started well, leading 8-0, but were gradually reeled as they continued a disappointing sequence of results that has seen them slip to 10th in the French Top 14.

Despite their results, Toulouse haven’t strayed too far from their traditional values, even if they are less potent than in their pomp. “They have a big strong pack, a good lineout and a powerful maul with really speedy, evasive backs in players like Gael Fickou, Maxime Medard and Yoann Huget – proven internationals and with space are dangerous,” said Madigan.

“They use the ‘short side/hit back’ play very well. They try to trap your backs on the open side and then have their quick men running at your heavier, less mobile players. It worked well in the game and they scored a good try from it.”

Toulouse place a huge emphasis on the offloading game, looking for their behemoths in the pack to power through tackles or get their hands free and get the ball to supporting players. When unchecked or only partially stopped, it provides a significant defensive headache, as once through the initial breach the French side have players who can finish from distance.

Bordeaux understood the nature of their foe and prepared accordingly, as Madigan explained. “Joe Worsley, our defence coach, had us well prepped during the week, practising one defender going low, and the second player coming in to block the offload and attack the ball.”

On the other side of the ball, Madigan explained that Bordeaux focused on playing their normal high-tempo game to take Toulouse into double figures in terms of the number of phases, all the while trying to create a mismatch between backs and forwards. “It was where we got the most pay,” he said.

It is something that Munster have done very effectively this season, softening up the opposition by punching around the fringes.

The 31-times-capped Ireland outhalf, who leaves Bordeaux for Bristol at the end of the season, maintains that Toulouse are a more dangerous side than their results suggest. “It has been a very tight season in the Top 14 and where they sit in the league doesn’t tell the full picture. They have been on the wrong side of some very close games.

“It must be respected that they did well to get out of there pool in the Champions Cup after a slow start.”

Did he notice Toulouse players’ heads going down in the match? “No, they are a very tight team; they fought till the end of the game.”

So what’s his overview of Saturday’s quarter-final, knowing the Munster players as he does and fresh from a game against Toulouse? “I think Munster have been really impressive this season, very hard to break down in defence, creative and physical in attack. If they go out and execute, they will be very hard to beat in Thomond.”

He believes that the venue is significant. “It will be a factor as it is an intimidating place to play. The support is incredible. Toulouse have plenty of players who have played in big, high-pressure matches but it will still be a factor.”