Players, coaches and even playing style have been transformed since ‘Bloodgate’ 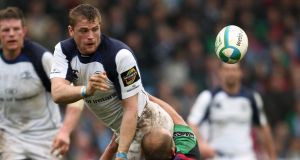 Jamie Heaslip should be one of the few survivor from when Harlqeuins and Leisnetr last met in 2009. Photograph: Billy Stickland/Inpho

The Leinster team won’t be selected until Friday. But of the 15 players who started against Harlequins in the 2009 ‘Bloodgate’ quarter-final, probably just three, maybe four of those will start the game on Saturday.

Rob Kearney, Gordon D’Arcy and Jamie Heaslip are the only likely players from 2009 to line out in The Stoop this week, that is, apart from Mike Ross who was tighthead for Quins that day.

Luke Fitzgerald was on the left wing five years ago but as he struggles with injury may not be fit for the return.

Shane Jennings was also part of the starting backrow trio along with Australia’s Rocky Elsom and Heaslip. But again with this season’s permutations in the Leinster squad and the development of Dominic Ryan, Jordi Murphy, Rhys Ruddock and Jack Conan, he probably won’t fit into the coach’s thinking.

A large rump of the starting team under Michael Cheika was largely an experienced bunch of internationals working in their prime.

The Harlequins team under Conor O’Shea this weekend will be quite different to the one turned out by Dean Richards. But Leinster too are a team quite apart from the one that won 6-5 that year before going on to become Heineken Cup champions for the first time.

“There was an age profile with some of the guys in the twilight of their careers,” says Simon Keogh, who was on the bench that day alongside Girvan Dempsey and Shane Horgan.

“You go through the team that started. Brian was there. Isa [Nacewa] would have had a few more years . . but it was that age profile that was the strength of the team. Rocky was in his 30s so there was experience but also excitement in the back line. And the team went on to win the Heineken Cup that year.”

It was Leinster’s breakthrough season as the ‘Bloodgate’ scandal began to slowly unravel. Dean Richards, Tom Williams, the physio, the doctor, the club and their calamity of deceit was eventually rumbled. But did the Leinster players care?

“From our perspective nobody cared about Bloodgate,” says Keogh. “Or rather after the game it wasn’t something we were thinking about. We came away with the points. I suppose if the result had have gone a different way, maybe we would have. But the way we were thinking was that we were in the Heineken Cup semi-final and that’s what we had come for.”

Seán O’Brien was also on the bench that day along with Trevor Hogan, Ronan McCormack and John Fogarty. It would seem heretical these days but none of the bench was used.

“Yeah I think this week it is definitely going to be tight. I don’t think a sub was used [in 2009],” he says. “The match was just was on the edge that day and I think it could well turn out that way this time.”

“Dean was coming from Old School English,” says Keogh, who also played at The Stoop for five years where he won a Challenge Cup medal.

“He would have come from and been involved with the clubs when they were just clubs. He didn’t mind the ‘hairy arse forwards’ and he would have been used to ‘tucking the ball up the jumper’. Leicester were famous for it and that’s where Dean came from.

“But he also laid a foundation when he was in charge and Harlequins have absolutely been building. Conor has further built the team from that and now they are a dangerous side.”

Clearly both teams have moved far away from where they were five years ago.

“Harlequins have a super halfback pairing in Danny Care and Nick Evans. Last year they had one of the best fullbacks in the world in Mike Brown. And the likes of [Chris] Robshaw and [Nick] Easter in the backrow too. They definitely have the back bone of a really strong side.”