Euro zone stability is once again under threat

Wolfgang Münchau: It would have been much better to have a coordinated approach to the coronavirus crisis 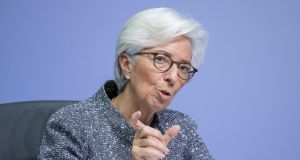 Christine Lagarde’s statement that other actors should be responsible for bond spreads, using other instruments, is troubling.

With a single remark about bond yields, the fairy dust was gone. Last week, Christine Lagarde, the European Central Bank president, blew away the 2012 guarantee given by her predecessor, Mario Draghi, to do “whatever it takes” to preserve the euro.

A few days earlier, European heads of government had refused to coordinate their fiscal policies. Some market participants added the two together and concluded that the probability of another euro zone crisis has risen. Italian bonds sold off so quickly that their yields rose by a record daily amount.

The reality of Europe’s fiscal and monetary policy is more subtle than what I just described, but the inference is correct. The future of the euro zone has indeed become more uncertain.

The risks are different from those in the last crisis. The euro zone will not fail because of a collapsing bank. Since then, euro zone member states have set up the single supervisory mechanism and started a banking union. Last Thursday, the ECB supported the banking system with ultra-cheap credit.

But the euro zone is now at greater risk of failing politically than it was then. Mr Draghi’s famous backstop removed a key motivation for countries to consider leaving the euro zone.

Without that backstop, the argument for Italy to stay in the single currency will become more finely balanced.

Ms Lagarde’s statement was not your average rookie mistake. A former managing director of the IMF, she is an experienced crisis manager. Instead her comments last week confirmed a suspicion that many observers, myself included, had from the moment she was nominated. She looks at monetary policy through the eyes of a lawyer – very much the way most Germans do.

Legally, she is correct, of course, when she says that it is not the job of a central bank to stabilise bond yields. The European Court of Justice supported Mr Draghi’s asset purchase programme as a monetary policy tool, but it also set limits. The former ECB president’s intervention saved the euro zone, but also raised deep questions about governance. He may have inadvertently given EU leaders an excuse to do nothing about fiscal union.

We should perhaps also recall that Mr Draghi’s 2012 pledge started off as a personal commitment. It worked because it was credible. That is precisely why Ms Lagarde’s statement that other actors should be responsible for bond spreads, using other instruments, is so troubling.

Coming from her, we actually believe it. She tried later to walk back her statement, saying she was “fully committed to avoid any fragmentation” of the euro zone, but it lacked credibility.

Whatever the merits of Ms Lagarde’s view of the ECB’s role, the timing is awful. We are in the middle of a pandemic. The other actors she referred to, EU leaders, are not doing any better. In a midweek telephone conference they characteristically failed to come up with a coordinated fiscal response.

This does not mean that they will do nothing. It means each country will act, for itself. The German government said on Friday that it will offer financial aid to companies affected by the crisis. But the combined response will have an asymmetric impact.

Taken together, the national policies will constitute a stimulus of sort, but they will end up increasing the euro zone’s internal imbalances. The fiscal deficits of Italy, Spain and France will increase a lot. Those of Germany, the Netherlands and Finland may go up too, but by a lot less. The fiscal gap between the north and the south will widen.

Instead, we are back to arguing about Italy’s solvency, which depends on low bond yields. And that, as we saw last week, requires the ECB’s unwavering support.

Italy cannot generate enough growth to service a growing debt burden otherwise. Without ECB support, more Italians, not just on the extreme right, will ask whether they should leave the euro zone and regain control over their exchange and inflation rate.

Italians have reason to feel let down by Ms Lagarde and the EU. After she spoke on Thursday, Italian president Sergio Mattarella issued an unusual statement asking the EU not to put obstacles in Italy’s way.

Italy has not forgotten the reluctance of other EU member states to take in Syrian refugees who landed on Italian shores. Italy will emerge from its Covid-19 nightmare to a different world. It is not good for the EU to antagonise a founding member state.