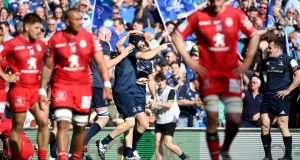 The quarter-finals delivered in spades to produce an aristocratic last four and the semi-finals, in their own way, had a similar effect.

Leinster’s 30-12 win over Toulouse at a vibrant and sun-drenched Aviva Stadium yesterday was almost as emphatic as Saracens’ ominous beating of Munster in Coventry on Saturday. And so, not unexpectedly, the Heineken Champions Cup final on May 11th in Newcastle will thus be contested between the winners for the last three years and, undoubtedly, the best two teams in the competition.

Leinster lead the head-to-head by 3-0, but the 2010-11 pool wins have little relevance. Leinster beat Saracens by 30-19 in last season’s quarter-finals, but that was at the Aviva Stadium, with Saracens suffering something of a post-Lions hangover, and also on the back of Ireland completing the Grand Slam at Twickenham.

This will not only be at a neutral St James’s Park, but will come on the back of that English win in Dublin on the opening day of the Six Nations, the ripple effects of which were felt for the remainder of that tournament.

Most of all, Saracens have a whiff of vengeance in their nostrils and, as Johnny Sexton acknowledged, are in menacingly good form, judging by their 32-16 win over Munster in Coventry.

Proving that class is permanent, Sexton was masterful in directing Leinster skilfully around the pitch, contributing some classy touches and landing a 12-point haul which understandably made him the choice of man of the match in what was his first game since the Six Nations and first appearance for Leinster of the calendar year.

Sexton described on TV the final as “the biggest battle of our careers”, and in explaining his reasoning smiled and said: “Did you see the game yesterday? It was pretty physical. They’re an outstanding side. I’ve heard them reference our game last year as a big turning point for them in terms of them feeling they hadn’t turned up on the day and fired as many shots as they wanted to. That’s what they said.

“Obviously they will have Billy Vunipola back who didn’t play last year; he’s such a huge player for them. You flip the switch straight away and start thinking about them. It’s going to be probably the toughest game I’ve ever played with this group.”

Intriguing match-ups involving internationals and Lions of the highest calibre abound, uppermost amongst them being the latest duel between Sexton and Owen Farrell. But, all things being well, there’s also Mako Vunipola vs Tadhg Furlong, James Ryan vs Maro Itoje, Jack Conan vs Billy Vunipola, James Lowe vs Liam Williams, and Rob Kearney vs Alex Goode. Come to think of it, pretty much all of them really.

Saracens’ aerial bombardment set the template and the tone from early on against Munster, and Leo Cullen cited that before adding: “They probably control and possession – I don’t know, off the top of my head I would say 60-65 per cent in both – and it’s a pretty dangerous combination because with the power they have in their team, if you’re constantly defending it’s going to be tough work against them.

“So you need to be able – to use the cliche, I suppose – fire shots. You need to be able to play against them, and how you manage possession. But they’re a very efficient team. They don’t burn that much energy. They’re happy through 3, 6, 9, 12 early in a game, so your discipline needs to be good and not allow that scoreboard pressure. They’re a very hard team to chase the game against because they just strangle you then.

“They’re a well-coached team. They’ve been doing it for a number of years now. They’ve built a lot of experience as a group together as well, which makes them doubly dangerous. They’re [a] great challenge for us.

“It’s really exciting. We talked about it being a privilege to be in a semi-final, it’s an absolute privilege now to be in [the] final, and now we’ve just got to get busy working again, which is a great thing.”

As was the case on Saturday, there could be no gripes on Sunday from the losing camp, only a frank admission that they were beaten by the better team.

“The best team won, we all think that’s clear,” admitted Toulouse joint head coach Ugo Mola. “Leinster’s team created a mastery of rugby and some good opportunities in the match, we were unable to resist the trend.”

“I’ve said before they’re world class,” said Jerome Kaino, Toulouse’s captain and World-Cup-winning backrow. “As a collective they’re great. That atmosphere and that game is definitely up there. As a whole system and team, they’re definitely world class.”

It’s been a tougher route to the final for the champions than last season in many ways, but they are there again.

“I think what pleased us most is the attitude of the players over the last couple of weeks and how they have applied themselves at training,” said Cullen. “And when they prepare well they have a much better chance of performing well in these games.

“As Johnny mentioned, it wasn’t perfect. There was great fight for each other out there. You could see from the players how much it means to them. They responded to the support so well, a great occasion again at the Aviva and the players feed off that energy.

“And although Toulouse made some inroads around us, through the ruck on a few different occasions, I think the fight to stay in the battle from our guys was so important. They showed a lot of resilience, particularly as they get closer to our try line, and they are good qualities to have in these games.”

As things stand, 41,000 tickets have been sold for the final, with 4,500 to be allocated to each of the finalists. If Saracens do not take up their full allocation, any remaining tickets will be offered to Leinster on a first refusal basis.

It seems safe to presume that Leinster fans will comfortably outnumber those from Saracens.