Stuart Lancaster all too aware of the quality Saracens will bring 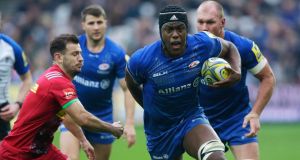 What is the more energy efficient ‘fuel’ to propel a team in sport, the pain of disappointment or the elixir of success? There isn’t a definitive answer and that’s why Sunday’s Champions Cup quarter-final between Leinster and Saracens promises such a fascinating tussle.

Saracens have righted a season that was listing at times, now second in the Aviva Premiership, the two-time and defending European champions escaped from their pool and at the weekend will rigorously test the credentials of the tournament’s number one seeded team, one that aspires to their crown.

Within their ranks Saracens have a number of players who suffered a genuinely disappointing Six Nations Championship with an underperforming England but restored to the black and red colours of the London club, will draw strength from the comfort of a playing community that is well versed in winning on the road in Europe.

Opposing them is a Leinster team that in personnel terms provided a backbone to Ireland’s recent Grand Slam success but come Sunday the counter is reset. Leinster’s senior coach Stuart Lancaster has worked with several of the Saracens players during his time as England coach; he understands the quality and mentality they will bring.

He’s also reluctant to place much store in the intangible. “I think it’ll work both ways. There’s a spring in the step (of the Irish players and with it) the confidence that winning a Grand Slam brings, but that said, every game starts from zero, as we saw on Saturday. We had quite a few guys that played in the Grand Slam (match) and we got beaten fair and square by Ospreys.

“It works on the flip side for Saracens, too. Lads will leave a situation where they have not got the outcome they wanted, and the motivation is to go back to the club and play. They’re a tight-knit group at Saracens.

“Mark McCall has done a brilliant job at creating that sense of culture and identity that really drives their mentality. You saw it in Maro’s (Itoje) performance on Saturday against ‘Quins. He got man-of-the-match and deservedly so. So, all this, ‘Maro’s tired,’ I don’t buy it. He certainly didn’t play tired.

“You learn a lot about yourself when you lose and sometimes it’s for the better. I can’t say I was pleased with the loss against the Ospreys but it certainly gives us plenty of motivation going into this week.”

The 23-year-old Itoje, who has been outstanding for Saracens, England and the Lions over the past couple of seasons, received some criticism in the media for his performances in the recent Six Nations, some claiming that he looked a little tired or sluggish. In response, on scoring a try against Harelquins at the weekend he puts his two hands under his head, mimicking have a rest, to cock a snook at his critics.

Comparisons with the Leinster and Ireland secondrow James Ryan are obvious without being invidious. Lancaster offered: “They’re both high-quality players although they play slightly differently. They’ve got the same drive, the same mentality of wanting to succeed. James suffered last year from that injury but it was a blessing really in that allowed him to develop the physical size and physicality you need at international level.

“That, plus his confidence and belief has grown through the Champions Cup for us which had led into Ireland games. Obviously playing big games, you can’t accelerate that, you’ve got to go through it. There is no doubt James will be a better player for going through the Six Nations and everything that has happened for him.

“That said, I’ve been involved with England, and given lots of lads their first cap and they go on this rise, maybe 15 players in that category. But then they get more scrutiny, people give you more attention and start to look at your game in more detail. That is when the challenge comes and that is the same for James or Maro or any of them.”

Ryan has modified his game slightly from the free ranging athletic presence from his schoolboy and underage days to suit his team’s needs, according to Lancaster. “So if you ask James what role he’d enjoy the most, it would be the tighthead lock role and doing the grunt. There’s absolutely no doubt in my mind.

“That’s his DNA, that’s his point of difference, he’s going to go in there and he’s going to do the hard yards for the team and my job is to make sure he does that, but also to then try and add on the little bits and pieces that hopefully he can do.”

Lancaster expects Owen Farrell to play – the outhalf missed the Harlequins match with a quad strain – but feels it would be wrong to fixate on one play. “I thought Alex Lozowski did a great job at the weekend, he’s involved in the England camp for a reason.

“And I think people again try and put all the attention often to one player, but it’s the sum of their parts that makes Saracens effective. You talk about the England players, but it’s the players who are English that haven’t played in the Six Nations, like Brad Barritt, I think he’s critical for them, Alex Goode is critical for them in the way he can get out of the back field.