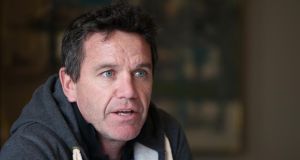 Russell Crowe wasn’t momentarily speechless collecting an Oscar for Gladiator. Nor did the cinematic hard man well up after the South Sydney Rabbitohs – his childhood club that he bought in 2006 — won last year’s NRL Grand Final to end a 43-year drought.

But standing on that field, victorious, a few paces from the smiling Englishman with a smashed cheekbone, Crowe could only shake his head at the question.

What about Sam Burgess?

Maximus eventually found the words: “Amazing, he’s amazing. He is truly the most incredible young man. I knew that when I first met him, I saw it in his eyes.

“I’ve explained to people my theory of the sparkly-eyed man. And he had it and he’s done it, and he’s won a Grand Final. And he won the Clive Churchill medal [man of the match] and he did it with a broken eye socket that happened in the first tackle.”

All that power, that intimidating presence was stripped clean away as soon as Burgess returned home.

Of course idyllic Somerset is nothing like home to a West Yorkshire lad. His brothers Luke, Tom and George all still play League in Sydney.

But he’s not alone. Bath’s head coach Mike Ford is another northerner in self -imposed exile down south. Ford’s circuitous Rugby League career took him, by chance, to Ireland in January 2002.

“Warren Gatland was the coach in 2001, the foot and mouth disease, remember? I had gone down to Pennyhill as special guest of Phil Larder, England’s defence coach. I was coaching Rugby League at the time, Oldham had been doing quite well and Phil had been asking about the system we were using.

“Apparently Warren rang Phil to ask about three League coaches as he was hoping to stay on with Ireland and employ a defence coach. Phil gave his opinion but added three other names. I was one of them.”

Gatland’s night of the long knives followed soon after so Eddie O’Sullivan inherited the list of six names.

“The only person he recognised was Ellery Hanley, ” Ford continued. “They arranged to meet Ellery in Leeds but picked me out as well as I lived nearby. I went in and met Eddie and the manager Brian O’Brien, did my interview and got the job. Bit lucky really but I never looked back.”

Saracens, Newcastle, England and the 2005 Lions tour followed before Ford joined the forefront of the Bruce Craig revolution at Bath.

Burgess is to be the sparkly jewel in Craig’s crown.

Most of the men who have made the League to Union transition failed to grasp the nuances of the 12 jersey.

Sonny Bill Williams has not only succeeded, he turned second-five-eight play into an art form. But it took Williams two testing seasons under the master tutelage of Tana Umaga at Toulon before he was even considered by the All Blacks.

Burgess has served just six months at Bath. Much like his Rabbitohs team-mate Ben Te’o at Leinster, he’s looked like an oversized foal at times.

“His progression has been really good,” Ford insisted. “People won’t see it but the way he is rucking out, he got another steal on Sunday, and the way he is presenting the football is near on perfect every time. He is not thinking of all those fundamentals of a rugby union player but once he gets that in his subconscious and starts being the real Sam Burgess with confident tackles, confident carries, doing what he does best, his progression over the next six months can be just as quick.”

Williams wasn’t content with his World Cup medal in 2011, flipping back to League to capture the 2013 NRL with the Rabbitohs’ bitter rivals, the Roosters. But he didn’t escape unscathed. In the Sydney derby Burgess wasted no time scanning the horizon for Sonny Bill. Charging like a rhinoceros, he trampled clean over the All Black, heavyweight boxer, one-man sporting brand.

“The reason I believe this is because Sam is so intelligent and he’s a very simple-minded person in that he knows what he wants to achieve and will do everything possible to do it.”

His try against London Welsh last Sunday showed a player beginning to grasp those vastly different rugby lines of running.

“He is fantastic as a leader around the squad already,” Ford continued. “I have no doubt in the three years he has here at Bath he will become the player everyone thought he would be.”

What about September’s World Cup, can Burgess become a dashing colt in such a short space of time?

“Hundred per cent he can get to those levels,” replied Ford instantly.

His expedition reaches its first jagged peak at the Aviva Stadium but it’s nothing to Burgess considering an adolescence riddled with suffering and loss. Mark Burgess was diagnosed with motor neurone disease when his son was 15. Sam became his father’s main carer.

“I’d literally carry him to bed. There was 21 stairs to the top, I remember it. That became the norm at home,” he said in the Slammin’ Sam documentary.

“When I look at Sam I just see my Dad,” said George Burgess.

Leinster’s sparkly-eyed man is commentating for BT Sport nowadays. The other is playing against Saracens on Sunday in Paris.

“Sam has carved his name deep in the history of Rugby League,” added Crowe on that victorious Grand Final field. Now he must do it all over again. Crowe’s boys, Sam and Te’o will surely collide in Dublin. Expect barely wrapped arms.