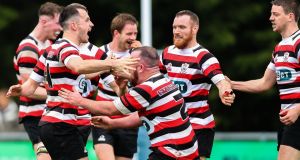 The undertones of celebration show no sign of slowing down, Enniscorthy rugby club’s head coach Declan O’Brien sent a picture of a pint of Guinness at 10am on Monday morning; a summons of sorts. The Wexford club added a ninth Provincial Towns Cup with a hard fought 10-9 victory over Wicklow RFC in Navan on Sunday, an achievement that sits comfortably alongside their victory in the All-Ireland League Round Robin series.

Next season Enniscorthy will enter the senior rugby ranks for the first time since a brief dalliance when they played in the Leinster Senior Cup in 1927. By 1931 that had been re-graded back into junior rugby, winning a first Provincial Towns Cup in 1934 and in the last seven years triumphed on four occasions.

Outhalf Ivan Poole, on the winning teams of 2012, 2015, 2018 and 2019 and centre Killian Lett, a former underage international and senior league medal winner with Clontarf – he also played for UCD – are among the elder statesmen, that’s anyone in the mid to late 30s, in what is essentially a young team drawn from the local area.

He kicked the winning penalty against Wicklow. O’Brien laughed: “It wasn’t a thing of great beauty; it looked like an attempt at the crossbar challenge but it went over.” Timmy Morrissey is another all-rounder that discovered a new vocation in the pack having started as a fullback.

A coach development officer (CDO) with Leinster, a former player with the province (1998-2002) who was a member of the first Celtic League winning team, O’Brien is part of a coaching team that includes former Ireland, Leinster and Greystones hooker John ‘Spud’ Murphy and New Zealander Kieran Hurrell. The latter, who takes charge of the backs, is also a CDO with Leinster with responsibility for the Dublin metropolitan area.

O’Brien continued: “It was a tight game, between two teams that had endured long seasons. I think that game was either our 28th or 29th game this season and that included fighting across a number of competitions, winning the Leinster League, All-Ireland Round Robin, Provincial Towns Cup and reaching the final of the All-Ireland Junior Cup.

“Kieran [Hurrell] has freshened things up and the players have really taken to him. We run a lot of ball and like to play a high-tempo game.”

In an ideal world Enniscorthy would add a little bulk to their squad but O’Brien has already spoken with Seapoint coach Damien McCabe – the Dublin club slipped back into the junior ranks after being beaten by Clonmel – who believes that Enniscorthy will be able to cope with the challenges of next season.

The support for the rugby team in the town has come from all quarters. O’Brien explained: “It’s been fantastic. Even though we won promotion [to senior rugby] there would be more of an attachment to the Towns Cup in terms of a general appreciation from the community.

“Our attitude has always been to build the club from the ground up and we have a good few guys from the Under-18s that should transition through.”

Now that Enniscorthy are a senior club they might persuade one or two from Carlow IT to play with them next season.

Clontarf’s excellent backrow Tony Ryan is an Enniscorthy native. O’Brien admitted: “I’d have had a few chats when he’s been home and the last thing he said to me was that he’d consider it when Enniscorthy get to the AIL. Mind you he’s settled now in Dublin but he knows that the offer is there.”

But before any thoughts of next year, there are a few days left of the celebrations as the steady stream of text messages to O’Brien’s phone illustrate. He protests that he’s too old but it’s unlikely to cut any ice. That pint at the ‘Rasher Counter’ in Doyle’s won’t drink itself.