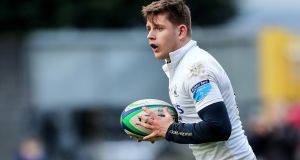 Brian Hickey’s Cork Constitution were 11 points clear of their nearest pursuers Clontarf, amassing a record 73 points from 15 victories in 18 matches during the league format of Division 1A and will be looking to make the final for a fourth consecutive season, having last won the trophy in 2017.

Irrespective of what team Hickey chooses, there is plenty of depth and quality, Conor Kindregan, Luke Cahill, Joe McSwiney, Brian Hayes and Vincent O’Brien offering just a flavour of the talent that Con can call upon up front. Outhalf Aidan Moynihan has contributed 144 points, while wing JJ O’Neill has crossed for seven tries this season.

Munster duo Shane Daly and Alex McHenry, a son of former professional golfer, John, have played in the team in recent matches and weren’t included in the province’s matchday 23 for the Pro14 game against Thomond Park on Saturday night. Ireland Under-20 Grand Slam winner Seán French may start.

Dublin University, who have won seven of their last nine matches including a 37-13 win over an understrength Con at College Park a month ago, have 14 of the matchday squad doing exams this week and six will sit two on Saturday. The Trinity bus will swing past Simmonscourt to pick them up at 6.30pm en route to Cork.

Colm Hogan has recovered from injury to take his place on the right wing while the backline also contains two Irish Under-20 fullbacks of recent vintage in Michael Silvester and Jack Kelly. Micheál O’Kennedy and Rowan Osborne are a talented set of halfbacks.

Trinity are without a number of the Irish 20s, Liam Turner, Thomas Clarkson and Ryan Baird; the latter is set to make his debut for Leinster off the bench in their Pro14 game against Ulster in Belfast. Secondrow Jack Dunne – who made his Leinster debut this season – starts, while hooker Dan Sheehan and the backrow trio of Johnny McKeown, Max Kearney and Niall O’Riordan provide athleticism.

A problem for the visitors might be securing possession on a weekend when examinations will be rigorous on and off the pitch. Con possess a formidable pack, have a very good set piece, a formidable maul and if they get that sort of a platform within 15 metres of the line then Trinity could be in trouble.

The eventual champions have topped the league table in three of the last four seasons a sequence which may continue as Con take the penultimate step.